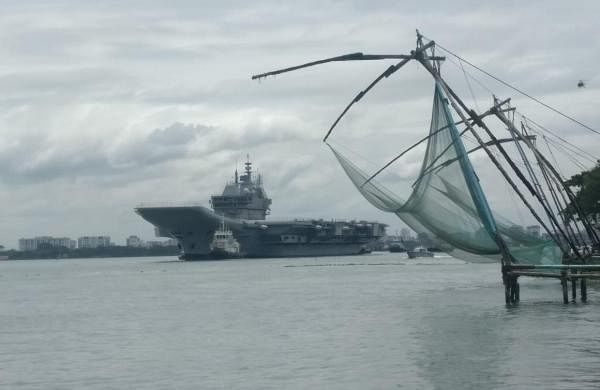 KOCHI: India’s first indigenous aircraft carrier (IAC 1), which is expected to be inducted into the Indian Navy as INS Vikrant during the first half of 2022, has set off for sea trials from Kochi on Wednesday. The Navy in a tweet described the moment as a proud and historic day for the nation. It is the largest and most complex warship ever to be designed and built in India.

The design of the aircraft carrier began in 1999, and the keel was laid in February 2009. The carrier was floated out of its dry dock on 29 December 2011 and was launched on August 12, 2013. The basin trials were completed in December 2020. The combat capability of the aircraft carrier is expected to add formidable capabilities and help secure India’s maritime interests in the region.

The 40,000 tonne vessel set off from Kochi Port at 9.30 am on Wednesday. A big team of 1,200 people, comprising Navy officers, engineers from Cochin Shipyard, original equipment manufacturers and experts have boarded the aircraft carrier and the team will be analysing the performance of various equipment on board the vessel for the next three months. The functioning of propulsion system, power generation and distribution system, turbines and other equipment will be evaluated.

The 40,000 tonne aircraft carrier was built at Cochin Shipyard at a cost of Rs 23,000 crore. The vessel has 75 percent indigenous equipment and is the most complex warship ever built by India. After completing sea trials, the Navy will start flight trials of fighter jets and helicopters to be operated from the deck of IAC. The Navy will be operating Advanced Light Helicopters (ALH), Chetak helicopters, MH-60R multirole helicopters and MiG-29K fighter jets from the deck of the aircraft carrier.