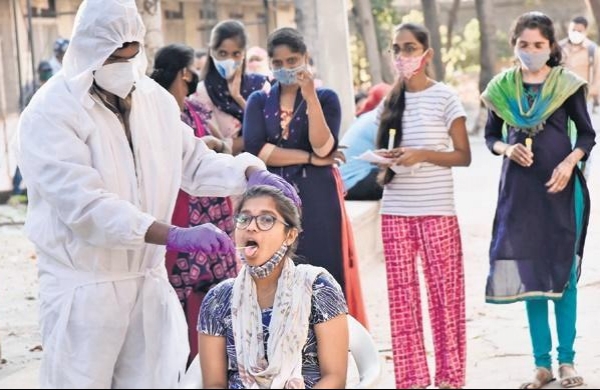 By ANI
NEW DELHI: India’s COVID-19 daily new cases continues to manifest a sustained downward trend with only 9,110 new cases recorded in the last 24 hours, said the Ministry of Health and Family Welfare (MoHFW) on Tuesday.

As per the health ministry, the low number of daily cases and rising recoveries have ensured a sustained fall in the active cases as it has dropped to 1.43 lakh (1,43,625) today.

Total cumulative recoveries stand at 1,05,48,521 today with 14,016 patients recovered and discharged in the last 24 hours. The difference between the recovered patients and the active cases continues to progressively grow and it is pegged at 1,04,04,896 today.

“With a consistent rise in cumulative recoveries, India’s recovery rate has reached 97.25 per cent, one of the highest globally. UK, USA, Italy, Russia, Brazil and Germany have lower recovery rate than India’s,” it said.

“India’s case fatality rate (CFR) of 1.43 per cent is amongst the lowest in the world and the global average is 2.18 per cent,” the ministry said.

According to the health ministry, as on February 9, 2021, till 8:00 am, nearly 62.6 lakh (62,59,008) beneficiaries have received the vaccination under the countrywide COVID19 vaccination exercise.

81.2 per cent of the new recovered cases are observed to be concentrated in six states and UTs.

Kerala has reported the maximum number of single-day recoveries with 5,959 newly recovered cases. 3,423 people recovered in Maharashtra in the past 24 hours followed by 550 in Bihar, the ministry said.

“Kerala continues to report the highest daily new cases at 3,742. It is followed by Maharashtra with 2,216, while Tamil Nadu reported 464 new cases,” it added.

78 deaths were recorded in the last 24 hours. Less than 100 deaths have been reported since the last 4 days.

Five states and UTs account for 64.1 per cent of the new deaths. Kerala saw the maximum casualties (16). Maharashtra follows with 15 daily deaths, while Punjab reported 11 deaths.