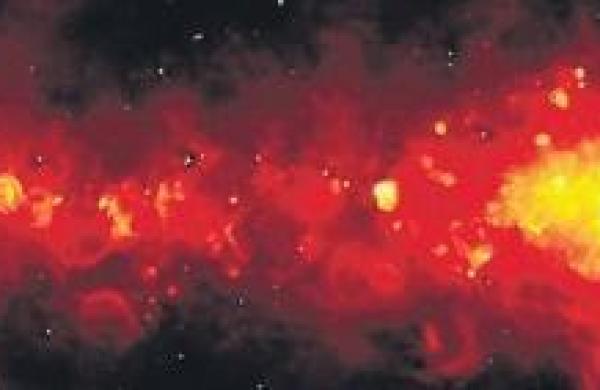 Express News Service
BENGALURU: An international team, including Indian scientists, have discovered 80 new explosions of stars – called supernova remnants (SNRs) – in the Milky Way galaxy, revealing previously unseen signatures to provide more clarity on how stars form and die. This had largely remained a mystery to astronomers and astrophysicists.An explosion of a star, resulting in an SNR, is followed by an expanding shock wave consisting of ejected material that travels through interstellar space.

These include heavy elements and accelerated cosmic rays, which have been detected, claiming “unprecedented sensitivity and details”, by the international team that includes scientists from the Bengaluru-based Indian Institute of Science (IISc) and Indian Space Research Organisation (ISRO)-established Indian Institute of Space Science and Technology (IIST) in Thiruvananthapuram, Kerala.

Previous surveys by various other teams had so far detected 270 SNRs, all of them observed by the radio emissions through the interstellar space. But there are an estimated 1,000 SNRs in the Milky Way, which means at least over 700-odd such SNRs continue to evade detection.

Prof Nirupam Roy, Assistant Professor, Department of Physics, IISc, Prof Jagadheep D Pandian, Associate Professor, Department of Earth and Space Sciences, IIST, and Rohit Dokara, PhD student at MPIfR and originally from IISc, who is the first author of one of the series of papers on the detection of new SNRs, published in the journal Astronomy & Astrophysics, are the Indian scientists under the Global View on Star formation in the Milky Way (GLOSTAR) project.

“Since the GLOSTAR survey detects a wide range of radio emission – from methanol molecules to ionised hydrogen – it is able to probe the formation of massive stars from very early to relatively late stages, which is important to get a complete picture of star formation in the Milky Way,” said Pandian, who has previously worked at MPIfR. Interestingly, all 80 new SNRs have been detected through the VLA data alone, although more are expected to be identified from the combined MPIfR’s Effelsberg radio telescope and the VLA data, an IISc dispatch said.

The Effelsberg radio telescope is capable of detecting large-scale star structures, while the VLA is a collection of small antennas that can capture details at high resolution. The data pooled from both telescopes helped the researchers paint a more comprehensive picture of different astrophysical objects in the Milky Way galaxy, explained Andreas Brunthaler of MPIfR, project leader and first author of the survey’s overview paper.“This is an important step to solve this long-standing mystery of the missing supernova remnants,” said Rohit Dokara.

The team was also able to confirm the presence of 77 previously discovered SNRs and reclassify a few that were found to be misidentified. The team was also able to detect dense pockets of ionised hydrogen, another tell-tale sign of the presence of massive young stars. The researchers detected traces of star formation, including radio emission from methanol molecules in a relatively nearby large star-forming complex called Cygnus X, about 4,600 light years from the Sun. Astrophysicists said such emissions are typical from massive stars in the very early stages of formation.

“As visible light gets absorbed in this dense cloud around stars, most of the optical telescopes don’t reveal much. What people look for, instead, are radio emissions,” said Prof Roy.  This feat is being touted as impressive, considering that the northern telescopes used in the GLOSTAR project are able to see only half of the inner regions of the Milky Way as the project does not have such powerful telescopes in the Earth’s southern hemisphere.Apart from the three Indian scientists, other members of the team were from MPIfR and NRAO, besides collaborators from institutions in the UK, South Africa, Mexico, France and Australia.