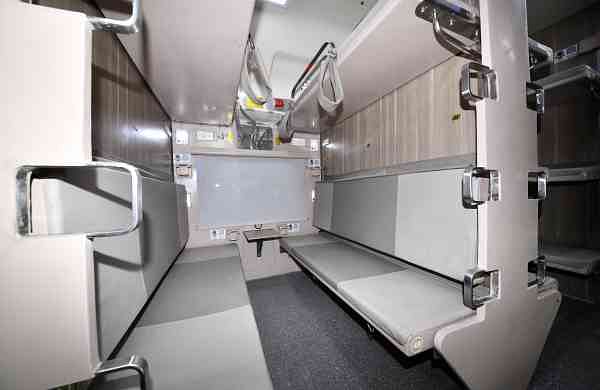 Express News Service
CHENNAI: With the completion of mandatory testing and trials, the Indian Railways is set to commence large scale production of AC Three Tier Economy coaches. The Integral Coach Factory in Chennai will build 344 such coaches this year, while the Rail Coach Factory, Kapurthala is tasked with the production of 250 coaches.

Official documents revealed that the ICF had been assigned to build the newly designed coaches which completed mandatory trials by Research Design and Standards Organisation (RDSO) and other organizations a few months ago. The AC 3 tier economy coach was designed and the first prototype was produced by RCF, Kapurthala last year. Upon completion of safety trials in March 2021, the railways announced that a new variant of AC coach will be inducted in Express trains running with Linke Hofmann Busch (LHB) rakes after necessary sanctions.

AC 3-tier economy class coaches are “economical” class and it will be in between the current AC three-tier and non-AC sleeper class. The new class coach can carry 83 passengers as against 72 persons in conventional 3 tier AC coaches. “Electrical switch gears had been shifted to under slung, thereby providing space for 11 berths additionally,” said sources.

Unlike conventional AC coaches, the new coaches had been designed to provide enhanced passenger comfort such as AC ducting to provide individual vents for all berths. Improved passenger conveniences in the form of foldable snack tables in both longitudinal and transverse bays, the coach has a modular design of seats. It has holders for water bottles, mobile phones and magazines, said a railway statement. Besides, individual reading lights, mobile charging points are provided for each berth.

The key feature of the coach is the ergonomically improved design of ladder for accessing the middle and upper berths and Indian and the Western style lavatories.

“The coach has been provided with luminescent aisle markers. Illuminated berth indicators integrated with night lights with luminescent berth numbers will provide better ambience for passengers,” added the railways.