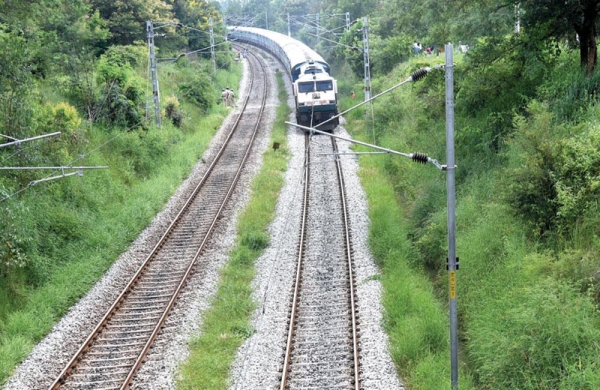 By Express News Service
DEHRADUN: Turning down Rajaji Tiger Reserve (RTR) administration’s request to not raise the speed of trains passing through the reserve from 50 kmph to 100 kmph, the  Indian Railways has stated that the demand is not ‘feasible.’

DK Singh, director of the RTR said, “We have raised the request again with the Indian Railway officials and the National Tiger Conservation Authority (NTCA) officials have also requested the railway ministry to slow down the trains while passing through the reserve.”

The officials of the RTR have written to the railways on Friday again.

Earlier, on January 7, the RTR administration had voiced its concerns on the railways’ decision to increase the speed of 18 pairs of trains plying between Haridwar and Dehradun on a 52-km track that passes through RTR.

Railway authorities have already agreed to keep the speed 35 kmph on an 18 km stretch which has been identified as sensitive by both the forest department and railways between 8 pm to 6 am.

The officials added that two areas within the 18-km patch- Motichur and Doiwala have witnessed death of around 12 elephants in last 20 years of duration.

Since the formation of Uttarakhand in November 18 elephants died in train accidents including two deaths in the year 2020.

Interestingly, Uttarakhand high court in year 2016 had directed to set up a monitoring cell to track the movement of elephants and other wild animals and to inform railway authorities, to establish coordination between the forest department and the railways and also the railways should ensure that the speed of trains should not be more than 30 Kms/hr while passing of the train through Jim Corbett National Park.

Responding to the queries, Tarun Prakash, divisional railway manager of Moradabad railways said, “We have not received their request yet. Reducing the speed will bring down the number of trains plied on the route contrary to state government’s request.