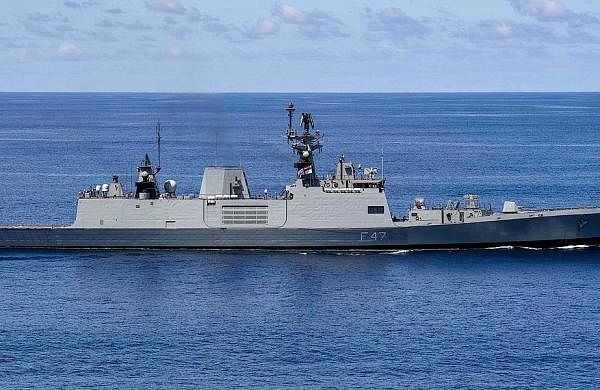 By ANI
NEW DELHI: A task force of four warships from the Indian Navy’s Eastern Fleet is scheduled to proceed on an over two-month overseas deployment to South East Asia, the South China Sea and Western Pacific, which will include exercises with Quad partners the United States, Japan and Australia, the Defence Ministry announced.

The latter three ships are indigenously designed and are equipped with a versatile array of weapons and sensors, and are Made in India by Defence Shipyards, a Defence Ministry press release said. The warships will participate in a series of exercises during the two-month deployment, including the Malabar 2021 naval exercises with US, Japanese and Australian forces.

In other bilateral exercises during the deployment, the Indian warships will work with naval units from South China Sea littoral states, including Singapore, Vietnam, Indonesia and the Philippines, the Defence Ministry said.

During the deployment in the Indo Pacific, the ships are scheduled to participate in bilateral exercises with the Vietnamese Peoples’ Navy, the Republic of Philippines Navy, Republic of Singapore Navy (SIMBEX), Indonesian Navy (Samudra Shakti) and Royal Australian Navy (AUS-INDEX).

Further, they would also participate in multilateral exercise MALABAR-21 alongside the Japanese Maritime Self Defence Force, Royal Australian Navy and the United States Navy in Western Pacific. “These maritime initiatives enhance synergy and coordination between the Indian Navy and friendly countries, based on common maritime interests and commitment towards Freedom of Navigation at sea,” the release said.

“The deployment of the Indian Navy ships seeks to underscore the operational reach, peaceful presence and solidarity with friendly countries towards ensuring good order in the maritime domain and to strengthen existing bonds between India and countries of the Indo Pacific,” the defence ministry said.

The Indian Navy undertakes regular deployments to friendly foreign countries and Indian and the Pacific Ocean regions in furtherance of Prime Minister Narendra Modi’s initiative of ‘Security and Growth for All in the Region – SAGAR’. Further, such engagements build ‘Bridges of Friendship’ and strengthen international cooperation.

Moreover, it will enhance military cooperation with friendly countries which is India’s pursuit as per ‘Act East’ policy.

Beijing claims almost all of the South China Sea as its sovereign territory, turning numerous obscure reefs and sandbars throughout the waterway into man-made artificial islands heavily fortified with missiles, runways and weapons systems.