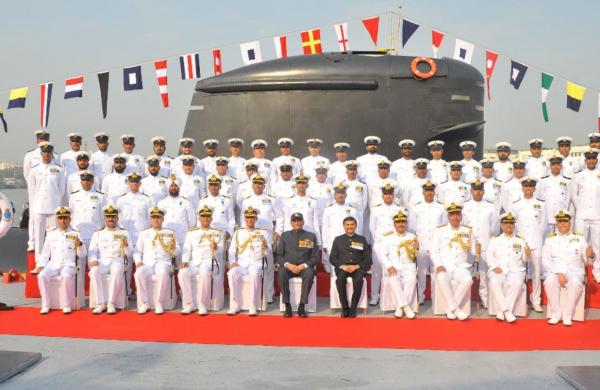 Six Scorpene-class submarines are being built in India by the Mazagon Dock Shipbuilders Limited (MDL) Mumbai, under collaboration with M/s Naval Group, France.

Indian Navy said, “INS Karanj would form part of the Western Naval Command’s Submarine fleet and would be another potent part of the Command’s arsenal.” Commodore Anil Jai Singh (Retd) Defence Analyst added, “With the focus now on Underwater Domain Awareness INS Karanj will be a valuable addition to the Navy’s underwater operational capability with its modern technology.”

Commodore Singh a former submariner added that all six submarines lack Air Independent Propulsion (AIP) limit their operational capability to some extent. The next set of six submarines to be constructed under Project 75 (India) will be AIP Capable.

The contract for Project 75 was signed in 2005. Two submarines of the ongoing project, Kalvari and Khanderi have been commissioned into the Indian Navy and Vela will be the fourth submarine to be commissioned in future. At the time this contract was signed Pakistan navy was operating submarine with AIP capability. AIP increases the stealth of submarines as it lets them stay underwater for long.

In a significant development, the Defence Research and Development Organisation (DRDO) achieved the important milestone by successfully completing the trial of the land-based prototype on 8 March.

It doesn’t have AIP, should have been completed by 2013. The time the contract was signed Pakistan had a submarine with AIP capability. Admiral VS Shekhawat (Retd), former Chief of the Naval Staff, who was part of the commissioning crew of the old Karanj and later the Commanding officer during the 1971 Indo – Pak war, was the Chief Guest for the ceremony.

Admiral Karambir Singh, Chief of the Naval Staff, and other senior officers from the Indian Navy and MoD were present during the ceremony.  The crew of the erstwhile ‘Karanj’, a Russian origin Foxtrot Class Submarine which was decommissioned in 2003 were also special invitees for the ceremony.

Old INS Karanj, commissioned on 04 Sep 1969 at Riga in the erstwhile USSR, also took active part in the conflict under the Command of then Cdr VS Shekhawat. In recognition of the valiant action of her oﬃcers and crew, personnels were decorated, including the award of Vir Chakra to the then Commanding Officer Cdr VS Shekhawat. Interestingly, the commissioning Commanding Officer of the old INS Karanj Cdr MNR Samant, later on, became the first Chief of The Naval Staff of the newly formed Bangladesh Navy in the year 1971.