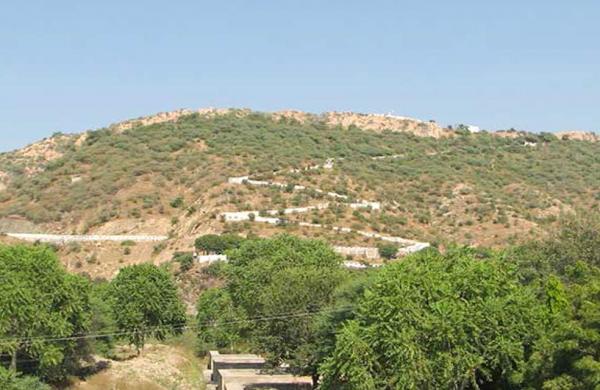 The Govardhan Hill, located 26 km from Mathura, holds a special significance for Krishna devotees. As the legend goes, Lord Krishna, in his adolescence, had lifted the Govardhan hill on his tiny finger for a week to protect the people of Mathura from the heavy and incessant rains, a result of Devraj Indra’s wrath.

The case surfaced after the seer of Mathura brought it to the notice of the district administration. An FIR was lodged against five persons associated with India Mart. The online selling site had fixed the price of Rs 5,175 per piece of rock.

Mathura rural SP Shirish Chandra said strict action would be taken against the e-commerce site and its office bearers for misusing IT to incite people’s religious sentiments.

He said an FIR was filed under Section 265 of the IPC and Section 66 of the Information Technology Act against IndiaMART founder-CEO Dinesh Agarwal, co-founder Brajesh Agrawal, and Mathura-based supplier Ankur Agrawal.

The FIR was lodged based on a complaint by Mathura-based social worker Keshav Mukhia at Govardhan police station, the SP said. Police authorities claimed that 10 more such complaints were lying with them. They were clubbed and the probe was going on, said the senior police officer.

In a written complaint given at the Govardhana police station, the protesting seers had alleged that a deliberate attempt was being made to dent the religious sentiments of a community.

On looking for the product, search engines were showing an image of the product along with details about it quoting the price of Rs 5,175 per piece. The product description said: “A Govardhana Shila is the rock from the Govardhan Hill in Vrindavan.  Govardhan Hill holds a unique position in Hindu Mythology related to Krishna…”

In fact, the Vaishnavites, the followers of Lord Vishnu, don’t step on the hill as it is considered another form of Lord Krishna himself who is often referred to as Govardhandhari, the bearer of Govardhan hill.

Hundreds of people demonstrated in front of Govardhan police station against attempts by the company to “trade the deity”.

Siya Ram Baba, a saint from Mathura, condemned IndiaMART saying: “Govardhan is Krishna himself. Anybody entering into a trade involving Govardhan would beinviting the wrath of the deity.”

Meanwhile, Uttar Pradesh Brahmin Mahasabha too met Mathura DM on Monday for strict action against the company and the supplier. After the arrest of IndiaMART CEO and two others, the site has withdrawn the description of the rock pieces and the sale offer. Earlier, it was claimed that the rock would bring stability to the thought process of the devotee, protect one from natural and unnatural calamities, and increase one’s aura and charisma.

“Worship of Govardhan Shila frees the devotees from sins. It stabilizes the thought process of the devotee and increases the capacity of right decision making…shelters and protects the devotee from all types of natural and unnatural calamities, sudden accidents, and thefts… The worshipper of Govardhan Shila gets a very long life and extremely good health. He does austerities and philanthropic activities all through his life,” the product description had said.