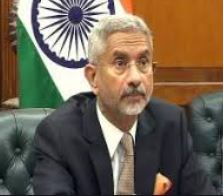 India’s Foreign Minister S Jaishankar will not attend a meeting on Corona to be led by Canada. This decision from India has come in the wake of Canada’s stand on the issue of farmers. Canadian PM Justin Trudeau said that he supports the agitating farmers.

After which a statement was issued by India asking Canada not to interfere in India’s internal affairs. Significantly, there will be a meeting on the Corona led by Canada on 7 December, in which the foreign minister will not participate.

Actually, Canadian Prime Minister Justin Trudeau had said about the protest of farmers in India that his country will always support peaceful protests. He expressed concern over the situation.

India reacted sharply to this, summoning Canadian High Commissioner Nadir Patel on Friday and objected to the statements of Trudeau and his cabinet members, and said that interference in the country’s internal affairs is unacceptable and if this action continues in this case, bilateral relations Can cause serious harm.