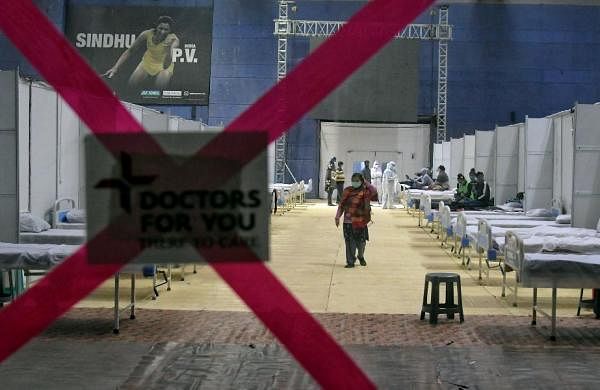 NEW DELHI/LUCKNOW/BHOPAL/CHANDIGARH/JAIPUR: As the third wave of COVID-19 powered by the Omicron variant sends numbers soaring across India, data from government hospitals of the states reveal interesting trends.

In Delhi, Uttar Pradesh, Madhya Pradesh, Chhattisgarh and West Bengal, bed occupancy in hospitals and COVID care centres has increased. Hospitalisation has gone up also in Maharashtra, Punjab, Bihar and Gujarat. Weekend and night curfews are in force, the fear is rising.

Metros like Delhi, Mumbai, Kolkata and Bengaluru are witnessing a rapid rise in cases and restrictions. There is a feeling that health infrastructure in these places is in for another serious challenge.

However, percentage of active cases admitted to hospitals has decreased in many parts. In Bihar, it has dipped from 47.72 per cent to 1.9 per cent in about a week. While over 65 per cent of active cases were being treated in hospitals in Rajasthan on December 29, it came down to 2.37 per cent on January 6. Experts believe vaccination has played a part in lowering hospitalisation.

In keeping with the Union Health Ministry’s recent advise, more and more patients with mild symptoms are in home quarantine. In Maharashtra, where authorities are contemplating a lockdown in mid-January, home isolation went up from about 1.22 lakh on December 25 to 5.85 lakh on January 6. Hospitalisations rose from 905 to 1,368 in this period.

Delhi has seen cases skyrocket. But hospitalisation rate compared to the number of active cases has decreased, from 6.6 per cent on January 1 to 4.81 per cent to January 7. According to Dr Suresh Kumar, director of Lok Nayak Hospital, mostly those with comorbidities and not vaccinated are getting admitted. “Cases are mild so far and not many patients have required oxygen support,” he said.

In Madhya Pradesh, hospitalisation rose by 174 per cent between December 29 and January 6. But this could be misleading, considering that active cases shot up by 706 per cent in this period. On January 6, of the 56,171 hospital beds for COVID patients, 200 (0.36 per cent) were occupied.

According to Indore-based chest physician Ravi Dosi, there is a marked difference between the second and third waves. “Just 3-5 per cent needed hospitalisation. Of those, only around 1 per cent were on oxygen or other critical care support. In the initial phases of the second wave, almost 30-40 per cent needed oxygen and other support,” he said.

Cases are soaring in Punjab, but hospitalisation rate with respect to active cases came down from over 6 per cent on December 30 to 1.01 per cent on January 6. The state government had increased bed capacity fearing for worse, but only about 1 per cent of them are occupied.

“If patients do not require oxygen, we ask them to be in home isolation. We hardly have beds without oxygen. Bed occupancy is low at present but beds have been added keeping in mind the projected caseload,” said Punjab’s COVID-19 nodal officer Dr Rajesh Bhaskar.

Despite a spike in numbers, Rajasthan has seen a drastic fall in hospitalisation. Dr Rateesh Sareen, Consultant, Pathology, and Deputy Director Legal at Jaipur’s Santokba Durlabhji Memorial Hospital, believes Omicron is following the trend noticed in South Africa, UK and US.

“It’s more contagious but what’s assuring is that ICU admission, oxygen-bed occupancy and hospitalisation have been less so far compared to previous waves. Most are in home isolation,” he said.