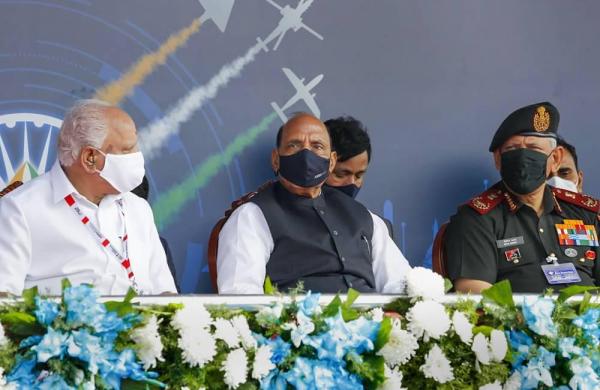 By Express News Service
BENGALURU: As Aero India 2021, which will showcase the Indian defence sector’s ability to make state of the art fighter jets and helicopters, took off with a spectacular flying display, Defence Minister Rajnath Singh sent out a strong message to hostile neighbours, saying India is prepared to counter any threat and protect its sovereignty at any cost.

Inaugurating the three-day event, attended by over 600 firms from many countries, Singh said India faces threats and challenges emanating from multiple fronts and has been a victim of state sponsored terrorism.

“Like many of our friendly countries, India also faces threats and challenges emanating from multiple fronts. India is a victim of state sponsored and state inflicted terrorism which is now a global threat. We have long witnessed unfortunate attempts to change the status quo along our unresolved borders. We are vigilant and prepared to counter and defeat any misadventure to defend our people and territorial integrity at all costs,” he said.

Singh said the government’s vision is to make India one of the biggest countries in the defence sector from design to production. We have set a target of 1.75 lakh crore including export of Rs 35,000 crore in aerospace and defence and services by 2024.

Aero India has laid a strong foundation for cooperation among countries of the Indian Ocean Region countries for peace and stability in the region.

The three-day Aero India 2021 took off with an impressive inaugural aerobatic fly-past and display on Wednesday after Defence Minister Singh inaugurated the event.

After providing a trailer of the joint performance of India’s two most popular aerobatic teams – Suryakiran and Sarang — at the full dress rehearsal on Tuesday, the two teams put out an even better show at the inaugural with both teams doing several tangoes during their aerobatics jointly.