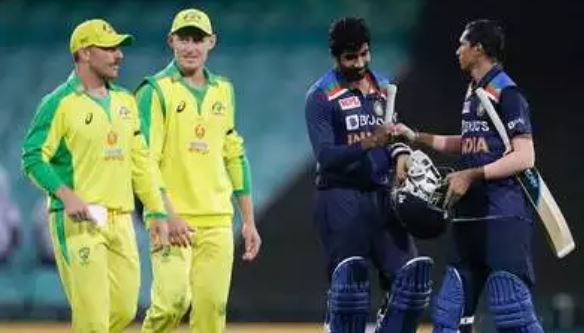 The first ODI between India and Australia at the SCG on Friday had a retro feel to it. India’s deep blue outfit was similar to the one they wore during the 1992 World Cup in Australia and New Zealand, and in South Africa later in the year.
On both those trips, they played almost an ancient brand of cricket. Batsmen got bounced out, fielders let balls through their legs and dropped catches and bowlers sprayed the ball all over the place. Virat Kohli’s team did their best to mirror that in all departments as they got outplayed by 66 runs against a power packed Australian line-up.

Chasing a mammoth 375 on a good batting pitch, India ended with 308/8, thanks largely to the efforts of Hardik Pandya (90; 76b, 7×4, 4×6) and left-handed opener Shikhar Dhawan (74; 86b, 10×4), and their fighting alliance of 128 for the fifth wicket. The margin looked lesser because towards the end, Australia tried their part-time spinners to boost the over-rate, which was criminally slow by both teams.

Only briefly during that stand did India look competitive. The rest of the top-order looked rushed against the pace of Josh Hazlewood, who used the short ball expertly to prise out Mayank Agarwal, Kohli and Shreyas Iyer. Leg-spinner Adam Zampa also had an excellent outing, dismissing KL Rahul early and then coming back in his second spell to break the threatening stand between Dhawan and Pandya to end with figures of 4-45.