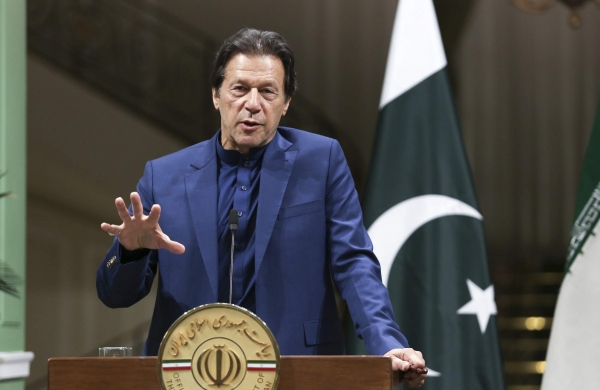 By Express News Service
NEW DELHI:  Pakistan Prime Minister Imran Khan on Wednesday said that the first step to improve bilateral ties was to address the Kashmir issue, reiterating that it was the only matter stopping improvement of bilateral relations.

“We will make efforts but India must take the first step because after August 5, till they take the first step, we cannot move forward. Our issue basically is Kashmir. We can settle it through dialogue and establish a relationship as neighbours,” Khan said at the First Islamabad Security Dialogue.

This is first time that Imran has spoken about relations with India post the two countries’ reiteration to strictly follow the 2003 ceasefire along the Line of Control (LoC) in Jammu and Kashmir.

Imran said that India’s decision to strip Jammu and Kashmir of special status and bifurcate it into two Union Territories on August 5, 2019 was a big blow to ties and was followed by a complete breakdown in the relationship.

“We still hope that they give the Kashmiris the rights they were given by the UN Security Council to decide their own lives. It will be as beneficial for India as for Pakistan,” he added.

India last month said that it desires normal neighbourly relations with Pakistan in an environment free of terror, hostility and violence.

India has also told Pakistan that “talks and terror” cannot go together and has asked Islamabad to take demonstrable steps against terror groups responsible for launching various attacks on India.

Khan dwelt at length on the issue of peace in the region, including peace between Pakistan and India, saying “the unresolved Kashmir issue was the biggest hurdle between the two countries.

“If India gives the Kashmiris their right under the UN (resolutions), it will be greatly beneficial for Pakistan as well as for India,” he said and added, “India can access Central Asia after peace.”

Khan said that having a direct route to the Central Asian region will economically benefit India.

Central Asia is rich in oil and gas.

Pakistan has been unsuccessfully trying to drum up international support against India for withdrawing Jammu and Kashmir’s special status and bifurcating it into two Union territories in August, 2019.

India has categorically told the international community that the scrapping of Article 370 of the Constitution was its internal matter.

The Ministry of External Affairs has also underlined that the Union Territory of Jammu and Kashmir is an integral and inalienable part of India.

India and Pakistan had announced on February 25 that they have agreed to strictly observe all agreements on ceasefire along the Line of Control (LoC) in Jammu and Kashmir and other sectors.

Ties between India and Pakistan nosedived after a terror attack on the Pathankot Air Force base in 2016 by terror groups based in the neighbouring country.

Subsequent attacks, including one on Indian Army camp in Uri, further deteriorated the relationship.

The relationship dipped further after India’s war planes pounded a Jaish-e-Mohammed terrorist training camp deep inside Pakistan on February 26, 2019 in response to the Pulwama terror attack in which 40 CRPF jawans were killed.

The relations deteriorated after India announced withdrawing special powers of Jammu and Kashmir and bifurcation of the state into two union territories.

Talking about non-traditional threats to Pakistan, Khan said that climate change, food security and a weak economy were among the biggest challenges in the quest to realise the full concept of security.

He acknowledged that improving the national economy was the biggest challenge but his government was trying to reduce trade deficit and control inflation so that the financial condition of common people could improve.

“We cannot become a secure nation when a small rich minority is surrounded by the sea of poor people, National security is achieved when a nation stands up to secure itself,” he said at the dialogue organised by the National Security Division and think-tanks comprising the Advisory Board of National Security Committee.

Khan also praised all-weather ally China for its “successful” handling of poverty and lifting more than 700 million people out of poverty in the last three decades.

“It is their big achievement whether you like China or not,” he said.

Khan said that Pakistan’s 25 per cent population was suffering from extreme poverty and another 25 per cent was just slightly better.

He said the government already launched Ehsaas programme to give cash to the poor people and another programme of giving targeted subsidies to the poor was being launched.

Khan also talked about peace in Afghanistan and reiterated support for the ongoing peace process by saying that Pakistan would be the greatest beneficiary of a stable Afghanistan.

The Islamabad Security Dialogue is envisioned as an annual flagship security forum based on the model of major dialogues on security and international policy.

The National Security Division, in collaboration with leading think-tanks that are part of its advisory board, has taken this initiative to provide a platform for critical thinking and robust intellectual discourse on some of the most pressing challenges and opportunities being faced by Pakistan and the wider region, according to an official statement.