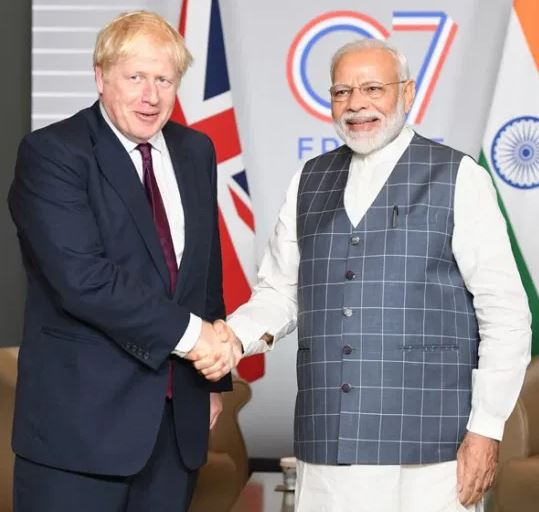 UK Prime Minister Boris Johnson is expected to be the chief guest at 2021 Republic day with Prime Minister Narendra Modi formally inviting him during their November 27 telephonic conversation. Johnson, on his part, has invited PM Modi to the G-7 summit in the United Kingdom next year, people familiar with the development said. The last British prime minister at the Republic Day parade was John Major in 1993.

While New Delhi is tight-lipped on the issue, diplomats feel that it is a well-thought-out strategy on part of PM Modi to invite his UK counterpart with a hard Brexit on the horizon and London uneasy about a special relationship with the US under incoming Joe Biden administration.

In his November 27 tweet, PM Modi said that he had an excellent discussion with his friend UK Prime Minister Boris Johnson on an ambitious road-map for India-UK ties in the next decade.

“ We agreed to work towards a quantum leap in our cooperation in all areas — trade and investments, defence and security, climate change and fighting Covid-19,” PM Modi said in his tweet.

People based in the UK who are familiar with the matter said the conversation between the two prime ministers was very positive, particularly with PM Johnson offering a free trade agreement with India and deepening cooperation on climate change issues. The two leaders discussed ways to further cement the partnership and put up a strong anti-Covid -19 response.

While the UK is aspiring to become Global Britain from Great Britain, the January 1 Brexit will put serious pressure on London as the European Union accounted for 47% of UK’s total trade; 43% of UK exports and 52% imports. With Europe prepared for a hard border and incoming US president Joe Biden earlier expressing his apprehensions about Brexit, the UK is facing uncertainty on trade issues.

From the Indian point of view, it is necessary for New Delhi to engage London as the latter is part of P-5 and still has the ears of the US on Afghanistan and Pakistan. The UK also has a strong political lobby from Mirpur in Pakistan occupied Kashmir (PoK), which often steers its course on issues like Jammu and Kashmir.