India has not conceded any territory in disengagement agreement with China in Pangong Tso: MoD 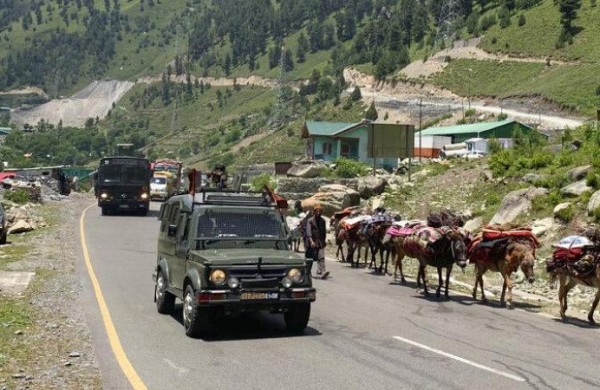 By PTI
NEW DELHI: The government on Friday emphatically stated that India has not “conceded” any territory following the disengagement agreement with China in Pangong lake areas in eastern Ladakh as political sparks flew thick and fast over the pullback process.

Hours after Congress leader Rahul Gandhi alleged that the government has “ceded” Indian territory to China and raised questions over the agreement, the Ministry of Defence (MoD) as well as the BJP came out with a hard-hitting response.

A MoD statement said that on the contrary India has enforced observance and respect for the Line of Actual Control(LAC) and prevented any unilateral change in the status quo.

It said those who doubt the achievements made possible by the sacrifices of the country’s military personnel are actually disrespecting them while BJP president J P Nadda asserted that Gandhi’s claim was an “insult” to the armed forces who are leading the disengagement strategy.

Nadda also wondered why Gandhi was bent upon making a false claim that the disengagement is a “loss’ for India, and asked is it a part of “INC-China MoU”.

The BJP chief took a jibe at Gandhi saying there is a new edition of “Congress circus” today and it is again due to the Congress leader.

The war of words erupted a day after Defence Minister Rajnath Singh announced in Parliament that India and China have reached an agreement on disengagement in the North and South banks of Pangong lake in eastern Ladakh that mandates both sides to “cease” forward deployment of troops in a “phased, coordinated and verifiable” manner.

The agreement signalled a breakthrough in defusing the nine-month border standoff in Ladakh.

In the statement countering Gandhi’s claims, the MoD said the assertion that Indian territory is up to Finger 4 in the northern bank of Pangong lake is categorically false, adding the permanent posts of both sides in the area are “longstanding and well-established”.

The mountain spurs in the region are referred to as Fingers.

“Even the Line of Actual Control (LAC), as per the Indian perception, is at Finger 8, not at Finger 4. That is why India has persistently maintained the right to patrol upto Finger 8, including in the current understanding with China.”

The MoD further said the territory of India is as depicted in the map of India and includes more than 43,000 sq km currently under illegal occupation of China since 1962.

“India has not conceded any territory as a result of the agreement. On the contrary, it has enforced observance and respect for LAC and prevented any unilateral change in the status quo,” it added.

The ministry also asserted that permanent posts of both sides at the north bank of Pangong Tso are longstanding and well-established.

“On the Indian side, it is Dhan Singh Thapa Post near Finger 3 and on the Chinese side, east of Finger 8,” the MoD said, adding the current agreement provides for cessation of forward deployment by both sides and continued deployment at these permanent posts.

ALSO READ: US welcomes efforts by India and China to de-escalate situation in eastern Ladakh

In his statement giving details of the agreement, Defence Minister Singh had said China will pull back its troops to east of Finger 8 areas in the northern bank of Pangong lake while the Indian personnel will be based at their permanent base at Dhan Singh Thapa Post near Finger 3 in the region.

Singh had also assured Parliament that India has not conceded anything in the sustained talks with China and it will not allow even an inch of its territory to be taken away by anyone.

The MoD statement said it has taken note of some “misinformed and misleading” comments being amplified in the media and on social media regarding the disengagement currently underway at Pangong Tso, asserting it is necessary to set the record straight and counter certain instances of wrongly understood information.

It further said the defence minister’s statement also made clear that there are outstanding issues to be addressed, including at Hot Springs, Gogra and Depsang, adding they are to be taken up within 48 hours of the completion of the Pangong Tso disengagement.

“The Prime Minister should say – I have given Indian land to China, this is the truth,” he said targeting Modi.

He said it has emerged that Indian troops are now going to be stationed at Finger 3 at Pangong Tso lake.

“Finger-4 is our territory, that is where our post used to be. So, now we have moved from Finger-4 to Finger-3.

Why has Prime Minister Modi given up Indian Territory to the Chinese? This is the question that needs to be answered by him and by the Defence Minister,” Gandhi said.

He asked why have Indian troops, after the hard work that they had done in capturing Kailash ranges been asked to move back.

“What has India got in return for this? Most importantly, the more important strategic area, Depsang plains, why have the Chinese not moved back? These are the real questions. Why have they not moved from Gogra-Hot Springs”.

Gandhi said it is the responsibility of the prime minister to protect the territory of the country.

“Our soldiers risked everything, they had, to go to Kailash ranges. That’s where the strategic advantage, if any, arose. Now, the prime minister has given back the land. Status quo ante is irrelevant. Kailash has been given back and nothing has happened on the key area of which China wants, Depsang plains.”

“This is absolute 100 per cent cowardice. This is nothing else. The prime minister is a coward who cannot stand up to the Chinese…He is betraying the sacrifice of our army,” he charged.

In a statement, Congress’s chief spokesperson Rained Surjewala claimed that Singh’s address and the Defence Ministry’s statement “completely omit” the fact that the Government has agreed to withdraw Indian armed forces from dominant positions in Kailash ranges (southern Bank, Pangong Tso Lake Area), where the Chinese are at a disadvantage, without any quid pro quo by China.

“I am glad that the Congress has finally realised that PM Nehru created a ‘Himalayan Blunder’ by gifting 38,000 sq km land to China. Will it also question its co-owner, the coward Rahul Gandhi for making baseless allegations against PM Modi?”.