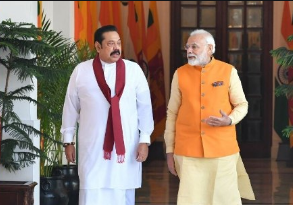 India extended $15 million to Sri Lanka for the promotion of Buddhist culture between both the nations as Prime Minister Narendra Modi held a virtual bilateral meeting with his Sri Lankan counterpart Mahinda Rajapaksa on Saturday.

The $15 million will be used to renovate Buddhist monasteries, promote the shared culture between both nations with connection to Buddhism and support Buddhist clergy. India is currently discussing Sri Lanka’s request for the $1.1 billion bilateral currency swap. India is also discussing the issue of deferring the debt repayments by Sri Lanka.

During the summit, Modi and Rajapaksa also discussed trade ties between the two countries. PM Modi conveyed to his Sri Lankan counterpart that he hopes Colombo relaxes temporary restrictions on import of a few Indian products. India also proposed launching a bilateral air bubble with Sri Lanka for travel between both countries.

Both nations also agreed to extend MoU on certain high impact community development projects over the course of the next five years.

In his address, PM Narendra Modi highlighted that under India’s ‘Neighbourhood First’ policy, India prioritises its relationship with Sri Lanka. “The relations between India and Sri Lanka are thousands of years old. According to my government’s neighbourhood first policy and SAGAR doctrine, we give special priority to relations between the two countries,” he said.

PM Modi also requested Rajapaksa to look into the issue of Sri Lankan Tamils and as a part of reconciliation efforts ensure the government works towards realising their expectations.