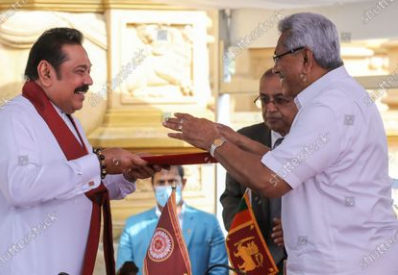 The Sri Lankan government led by Gotabaya and Mahinda Rajapaksa has reassured New Delhi that it would never allow China to use the island nation as “a staging area” to hurt the “strategic security interests” of India.

Sri Lanka’s new Foreign Secretary Jayanath Colombage quoted President Gotabaya Rajapaksa saying that the country would always have an “India First” approach. “That means Sri Lanka will not do anything harmful to India’s strategic security interests,” he said in an interview to Daily Mirror newspaper published from Colombo. The interview was published on Wednesday.

Colombage, a former commander of the Sri Lankan Navy, was the Additional Secretary (Foreign Relations) to President Gotabaya Rajapaksa before being appointed as the Secretary to the Ministry of Foreign Affairs.

His comments appear to be a move by Colombo to allay New Delhi’s concerns amid speculation that the recent landslide victory of the Rajapaksas’ Sri Lanka Podujana Peramuna (SLPP) in the elections might make it easier for China to spread its tentacles in the Indian Ocean region and get an edge over India.

“China is the second-largest economy and India is considered the sixth-largest. In 2018, India was the world’s fastest-growing economy. That means we are between two economic giants,” the Foreign Secretary of Sri Lanka told the Daily Mirror newspaper. He said that Sri Lanka could not afford, should not and would not allow any particular country to use it as “a staging area” to do anything against another country, especially India.

Sri Lanka is one of the Indian Ocean nations where China is trying to outsmart India in order to spread its geo-strategic influence. They had to lease out the Hambantota Port to China for 99 years after its construction by a China-based country resulted in a huge debt burden for it.

The second of Mahinda Rajapaksa’s two consecutive terms (2005-2015) in the office of Sri Lankan President had seen China expanding its footprints in the country, causing much to India’s discomfort. China was allowed to develop strategic assets, like Hambantota Port. The communist nation was also allowed to dock two nuclear submarines of the People Liberation Army Navy at the Colombo Port, raising hackles in New Delhi.

Colombage, however, said that Sri Lanka had initially offered the Hambantota Port to India. “India did not undertake it for whatever the reason….Then, it went to a Chinese company,” he said. “Now, we have given 85 percent stake of that port to China Merchant Port Holding Company. That should be limited to commercial activities only. It is zero for military purposes.”

Mahinda Rajapaksa was appointed Prime Minister after his brother’s election to the office of the President of Sri Lanka last year. He earlier this month led the SLPP to victory in the parliamentary elections and commenced his new term as the Prime Minister.