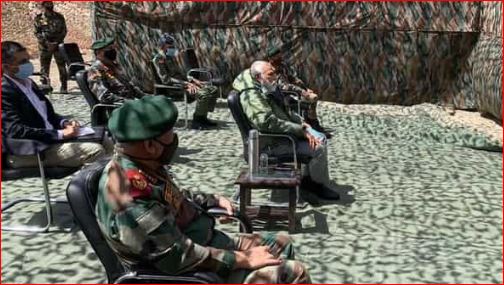 Prime Minister Narendra Modi arrived at Leh in Ladakh on Friday on a short visit against the backdrop of tensions between India and China along the border.

The visit is seen as a message of support to the Indian armed forces as it comes two weeks after 20 soldiers were killed in a violent clash at Galwan Valley, one of the points of friction along the border.

According to two people familiar with the developments, Modi is to be briefed on operational preparedness by top military officers of the Indian Army’s 14 corps. Lt General Harinder Singh, who heads the 14 Corps, has been holding talks with Major General Liu Lin of the Chinese People’s Liberation Army, the last round of which was held on 30 June.

Soon after his arrival Modi visited a forward area, Nimu, and interacted with Army, Air Force and Indo Tibetan Border Police personnel, news reports said. Nimu is in the Zanskar range and situated at an elevation of 11,000-12,000 feet.

The visit comes after Modi on Sunday had said the armed forces had given a befitting reply to those who threaten the territorial integrity of the country, and reiterated that India had right to protect its border and sovereignty.

Earlier, officials had said defence minister Rajnath Singh was to visit Leh on Friday but that visit was later postponed.

Singh’s visit on Friday was to be the first since 5 May when tensions arose between the two neigbours who share a 3,488 kilometre long Line of Actual Control boundary that has not been formally demarcated since their 1962 war.

Tensions spilled over on 15 June when 20 Indian soldiers were killed in a violent clash with their Chinese counterparts in Galwan Valley.

India has reinforced its troops presence in Ladakh as well as along the LAC since the tension mounted in May. The Indian Air Force too has moved air defence systems as well as a sizeable number of its frontline combat jets and attack helicopters to several key air bases along the LAC.

On Tuesday, senior commanders of India and China held their third round of talks in a month to sort out tensions and revive a de-escalation and disengagement plan agreed to in a meeting on 6 June. The two sides on Tuesday agreed on the need for an “expeditious, phased and stepwise” de-escalation as a “priority” to end the standoff. But they also agreed to hold more talks at the military and diplomatic levels to find a solution to the tensions – an indication that the two sides were still a long way away from resolving the tensions.