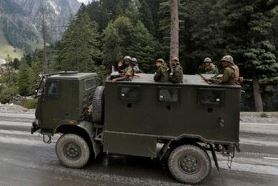 In a major development, the ongoing India-China border conflict may be resolved soon as the armies of the two countries have agreed for disengagement from parts of the Eastern Ladakh sector under which they would be moving back to their respective positions before April-May timeframe earlier this year.

The disengagement plan was discussed between the two sides during the 8th Corps Commander-level talks which were held on November 6 in Chushul.

As per the disengagement plan which is to be carried out in three steps in one week from the talks in the Pangong lake area, the armoured vehicles including tanks and armoured personnel carriers were to be moved back from their frontline deployment to a significant distance from the Line of Actual Control (LAC) by both sides, sources told ANI.

As per the discussions, the disengagement of tanks and armoured personnel carriers was to be carried out within one day. The talks were held on November 6 in which External Affairs Ministry’s Joint Secretary Naveen Shrivastava and Brigadier Ghai of Directorate General of Military Operations had taken part.

In the second step to be carried out near the northern bank on the Pangong Lake, both sides were supposed to withdraw around 30 per cent of troops every day for three days. The Indian side would be coming close to its administrative Dhan Singh Thapa post while the Chinese had consented to go back to their position east of Finger 8.

In the third and last step, the two sides were to withdraw from their respective positions from the frontline along the southern bank of Pangong Lake area which includes the heights and territories around Chushul and Rezang La area.