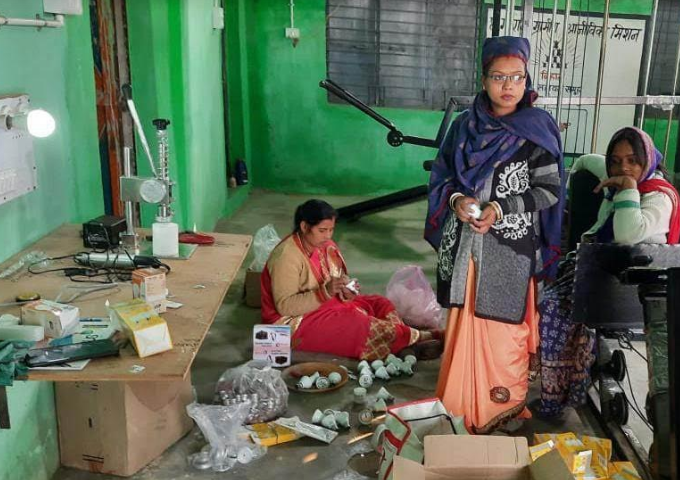 These women of the village, who used to light the stove in the houses and sometimes the chimney with matches, have over time adopted the means of self-employment, which is technical, but after handling the skills in their hands, they have not only made the technical based work easier, Rather, by joining LED bulb manufacturing, new possibilities have also been created to increase income in the future. The women of Suraj Mahila Gram Sangathan have adopted the work of manufacturing LED bulbs as a livelihood in village Chhindiya of Korea district. These women have developed new possibilities of their income by making more than 500 bulbs in just one month. Various livelihood oriented activities are being conducted in the Gauthans of the district, joining which rural women are moving ahead in the path of self-reliance. In this sequence, 8-10 women of Gothan village Chhindiya together started the work of manufacturing LED bulbs about a month ago. Neelam Kushwaha, a member of this group, told that under the National Livelihood Mission Bihan, information about economic activities was received from the officials. With the desire to do something new, the idea of ​​​​creating LED bulbs came. Under the guidance of the officers, 3 days training was given by the trainer who came from Raipur. The entire process of LED bulb manufacturing is explained. The women told that the raw material for the bulb is procured from Raipur. Bulbs are packed by pressing machine after making the required manufacturing by them. Women told that people are also getting benefit from quality bulbs at cheap prices. Women told that the demand for bulbs is increasing in the market. She herself is doing the work of marketing and promotion of the bulb. At present the bulb is being sold only at the village level, in the coming days they are preparing to send the bulb to the markets as well. Women say that before joining the group, most of the women were busy with household chores, now after trying their hands in bulb manufacturing, they have started seeing their future as golden. By manufacturing 550 bulbs in a month, they sell 150 bulbs. Women made 500 bulbs in just one month, out of which more than 6 thousand were earned from the sale of about 150 bulbs. They are selling a 15 watt LED bulb for Rs 140, on which a guarantee of 1 year and 6 months is also being given. Similarly, 12 watt bulb is being sold for Rs 120 with 1 year guarantee, 9 watt bulb for Rs 60 with 6 months guarantee and 5 watt bulb without guarantee is being sold for Rs 30. Like this:Like Loading… Continue Reading

CM Shri Chouhan congratulates the Fisheries Federation and the fishermen