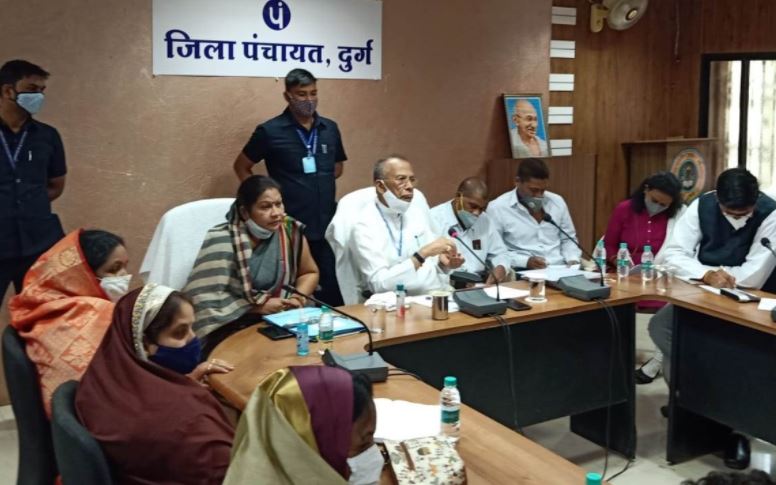 Public Works Minister Shri Tamradhwaj Sahu reviewed the departmental works in the meeting hall of Zilla Panchayat Durg today. Minister Shri Sahu said that special monitoring is being done by the department regarding the quality of construction works. Quality reduction will not be tolerated in any way. He said that the residents of the area meet a lot of expectations and keep their demands, which are very important for the development of the areas. These demands and proposals are being tested and included in the budget proposal.
Minister Shri Sahu said that during the visit to the Vidhan Sabha constituency, many demands are kept from the public, which is being made on the basis of usefulness of the work. He told the officials to always be vigilant in terms of basic facilities. The Narva, Garuva, Ghuruva, Bari scheme of the state government is the most important, it will prove to be the axis of development in rural areas. Officers should ensure that all possible facilities are available in Gothan. Gauthan became the center of livelihood activities. People could get benefit of Godan Nyaya Yojana. Paddy buying season will come. See to it that farmers get all kinds of facilities in paddy procurement centers. He said that adequate preparation should be done for this so that the farmers are not inconvenienced.
Minister Mr. Sahu said that the department is preparing a proposal for expansion of civic amenities. Opinions have also been taken from the public representatives in this regard. With the cooperation of all, work is being done on the basic public facilities. He said that the government is keeping a close watch on the implementation of Public Service Guarantee Scheme for providing civic amenities without any delay. Try to provide facilities to the people as soon as possible. Work at a fast pace continuously improves the image of administration. He said that mobile vans have been started to work specifically in the direction of health. Swami Atmanand English Medium School has been started to promote education. All these innovations are being done by the government. Their proper implementation has to be specially monitored. District Panchayat President, Mrs. Shalini Yadav, District Panchayat President Mr. Devendra Deshmukh and departmental officers were present in the meeting.