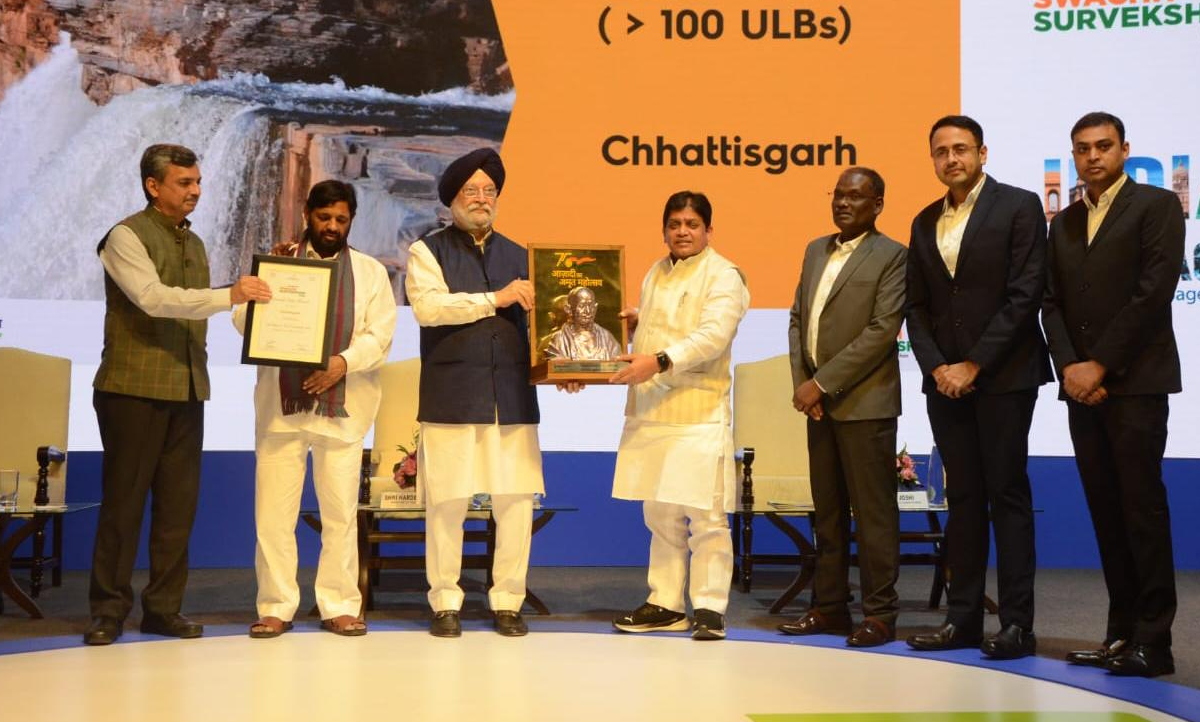 Once again in the Swachh Survekshan, Chhattisgarh has waved the flag across the country. In the category of small towns, Patan of Durg district has been ranked first in East Zone and second in the country. At the same time, Ambikapur has maintained its sovereignty among clean cities. Chhattisgarh stood second in the category of Best Performing State. Chhattisgarh has once again won the cleanliness in the Swachh Amrit Mahotsav organized at the Tal Katora Stadium in Delhi. Chhattisgarh’s Urban Administration and Labor Minister Shri Shiv Dahria received the honor at the hands of Housing and Urban Affairs Minister Shri Hardeep Puri. Joint Secretary Shri R Ekka, CEO and Mission Director of SUDA Shri Saumil Ranjan Choubey, Additional CEO Shri Ashish Tikriya were also present in the program. Among the cities with a population of more than one lakh, Ambikapur stood at number one in the state and Korba at number two. Balodabazar was rewarded with Citizen Feedback Award in the category of population of 25-50 thousand in East Zone. Along with this, eight cities of Chhattisgarh have won the Indian Cleanliness League (ISL) of the cleanliness survey. Out of these, seven urban bodies have been at number one and one in second place. Congratulating all the citizens of Chhattisgarh on this achievement, Chief Minister Shri Bhupesh Baghel has said that so many cities of the state have got awards due to the awareness of cleanliness of all the citizens. The award function of Swachh Survekshan was held on Saturday at Talkatora Stadium, New Delhi. President Smt. Draupadi Murmu felicitated the victorious urban bodies. The winning cities were announced in the Indian Cleanliness League (ISL) on Friday. Under different sections in the Indian Sanitation League, Bhatgaon and Mana Camp in urban bodies with a population of less than 15 thousand, Khairagarh in a population of 15 to 25 thousand, Jashpur Nagar and Kondagaon in a body with a population of 25 to 50 thousand, from 50 thousand Birgaon in 1 lakh, Ambikapur has secured first place in population of 1 lakh to 3 lakh, while Raipur has secured second place among cities with population more than 10 lakh. Why Patan is a pioneer in sanitation…. 1. Integrated Model of Convergence of Garba Garba Garba Bari and Sanitation 2. Country’s First IEC Experience Zone 3. Country’s First 5 Star Small City 4. Country’s First ODF City 5. Citizens are completely satisfied with the sanitation facilities here Due to being ahead in the city citizen feedback 6. Small towns first debris processing plant in the state 7. Role model for the whole country Visit by the entire state team on March 3 8. Urban Gothan 100 percent garbage and dung with excellent work Manure Manufacture 9. Treatment of sanitation workers through Mukhyamantri Slum Health Scheme was done like this survey- All 169 urban bodies of the state have participated for the cleanliness survey 2022. For this, the survey team has been continuously visiting the bodies for the last 8 months. The survey team inspected the progress of Swachh Bharat Mission along with state-sponsored schemes like Mission Clean City, Swachhta Shringar, Suvidha 24, Godhan Nyay Yojana, Nidan-1100, Nishtha etc. in the bodies. After inspection of the bodies, the condition of ODF was found to be as good as in the previous years. The public awareness representatives organized by the state government during the Amrit Mahotsav, such as cleanliness of statues of great men, branding of squares, maintenance of monuments etc. also formed the basis of excellent performance of state bodies. Unique initiative of Chhattisgarh… The state sent sanitation workers to Delhi to attend the award ceremony. The state of Chhattisgarh has sent cleanliness didi from every city to Delhi to receive the award at the award ceremony for the cleanliness survey. These include Patan – Lata Mandlesh, Ambikapur – Shashikala Sinha, Bhilai Charoda – Suniti Verma, Chirimiri – Anamika Vishwakarma, Akaltara – Gauri Bai Khande, Baloda Bazar – Subhashini Shendre, Balrampur – Kalmani Devi, Kawardha – Nisha Khan, Jashpur Nagar – Rakhi Singh, Vishrampur-Bharti Gupti and Sudha Mishra from Khongapani and the President, CMO of the respective urban bodies are included. It is noteworthy that no city or state has taken this initiative. Like this:Like Loading… Continue Reading