In support of Dr. Raman Singh, a sit-in was organized in the district, including Abhishek Singh, Madhusudan Yadav, many leaders were involved. 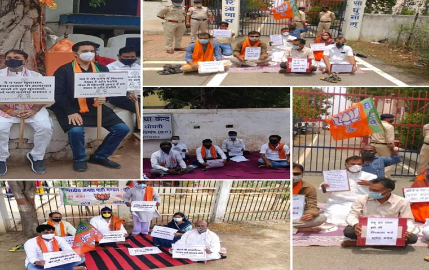 Former Chief Minister and MLA from Rajnandgaon, Dr. Raman Singh was called to the Civil Line Police Station of Raipur to give a statement in the toolkit case. In their support, senior MPs Abhishek Singh, Madhusudan Yadav, state BJP spokesperson Neelu Sharma, Yuva Morcha district president Monu Bahadur Singh, Kisun Yadu including senior BJP in all the police stations and police posts in the district, following the Kovid protocol. The leader also gave arrest. In the past, there was only talk of symbolic dharna.