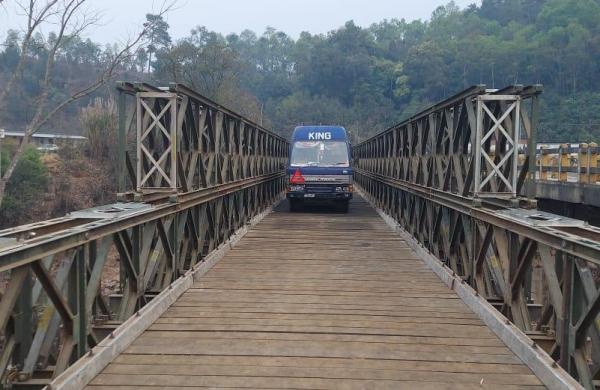 Express News Service
NEW DELHI: The Border Roads Organisation (BRO) recently launched an important bridge on the highway connecting Shillong and Silchar. Prompt action by BRO has brought much needed succour to the local population and has been deeply appreciated by the Civil Administration.

An existing RCC bridge with Load Class 70 (Fit to bear load of about 70 tons) at Barapani at Km 12.865 on National Highway (NH) 40 on Shillong-Silchar Highway was declared unfit for heavy vehicle traffic due to development of vertical cracks on the main beams and piers of the bridge.

The Army said on Thursday, “BRO commenced launching of the bridge on 11 2021 and completed on 15 March 2021, within five days, which was envisaged to be launched in 15 days.”

“After the on-site assessment by the BRO engineers, it was decided to construct a 230 feet continuous span Bailey Bridge over the Hamilton Bridge which was not under use and needed removal for launching a new bridge of heavier class. Restoration of piers and abutments was considered necessary to take a load of class 40 and above.” the Army said.

As per the Army, “Construction of new bridge would have taken at least three years. On humanitarian ground Director General Border Roads gave his consent for construction of alternate bridge on fast-track basis.”

Lt Gen Rajeev Chaudhry, Director General Border Roads along with representative of NHAI and PWD, Meghalaya visited the bridge site on 31 Jan 2021 to make an assessment of the task and give necessary directions to expedite the work.

Next to the RCC bridge was a Hamilton steel bridge in dilapidated state and was in disuse subsequent to construction of higher Load Class RCC bridge (which has now developed faults).

“Hamilton bridge was found unusable and needed removal for launching a new bridge of heavier class. Restoration of piers and abutments was considered necessary to take a load of class 40 and above.” said Army.

After considering all design aspects, it was decided to construct a 230 feet continuous span Bailey Bridge. BRO commenced launching of the bridge on 11 Mar 2021 and completed on 15 Mar 2021. This act of BRO has been appreciated by everyone.