In Assam’s centre of Vaishnavism, AGP appeals to voters to reject Congress, AIUDF 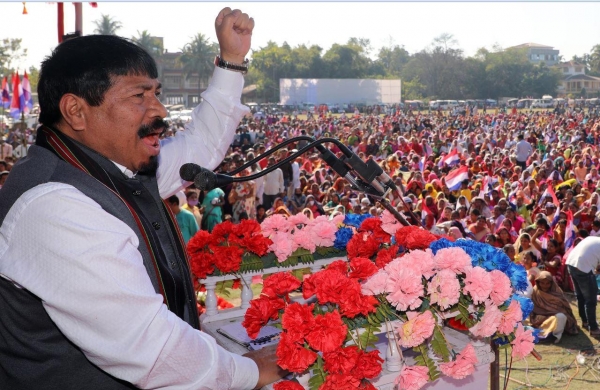 “Barpeta is Assam’s Satra Nagari (township) and it has a history. People from various faiths have always shared a bond of love and friendship here but the Congress and the communal AIUDF are trying to destroy it to gain political mileage. But we will thwart their attempt,” AGP president and minister Atul Bora told people at a “National Unity Conclave” of the party.

Satras are institutional centres associated with Vaishnavism. The Barpeta Satra was the workplace of 15th-century saint-reformer Srimanta Sankardeva. Muslims account for around 60% of the population in Barpeta district. The eight Assembly seats here are held by Congress (three), AIUDF (two), AGP (two) and BJP (one).

The AGP was born out of the six-year-long bloody Assam Agitation (anti-immigrants’ agitation) that ended with the signing of the historic Assam Accord in 1985. Barpeta was one of the focussed districts during the updation of National Register of Citizens or NRC. During an NRC pilot project in 2010, protests broke out in Barpeta town and four people were killed in police firing.

Bora squarely blamed the Congress for years of “underdevelopment” in the state.

“The Congress had ruled Assam for the most part. If they had worked sincerely and not divided people into the lines of religion and language, it could have built a progressive Assam. It is for the Congress that we are lagging behind many states in all sectors,” the AGP president said.

He predicted that the Congress-AIUDF combine would draw a blank in the polls. He said this was evident from the Bodoland Territorial Council elections held in December last year. The two parties had fought together but won just one of the 40 seats.

“They will meet a similar fate in the state elections. They will lose the polls fighting over seat-sharing arrangement between them,” Bora said against the backdrop of an attempt being made by the two parties to form a grand alliance of Opposition.

“We appeal to you to try to understand the ground realities. The AGP will provide security to those identified as Indians by the Constitution of India and who consider themselves as Assamese,” Bora said with his message directed at Bengali-speaking Muslims and Hindus.

He said the AGP had learnt from mistakes as it was trying to strengthen itself.

“We were in power for two terms but from 2001 to 2016, we had lost the trust of people. We analysed our mistakes and with new thoughts and a new vision, we are trying to take the party forward,” Bora said.

He said it was heart-warming that a lot of youth, including students, joined the party in recent times.

“The AGP is a secular party and it wants to march ahead with people from all faiths. The AGP believes in internal democracy. Every individual in it gets equal respect. Support us,” Bora said in his appeal to the people.

He said the AGP had aligned with the BJP in the greater interests of the state. However, Congress, AIUDF and some forces, which do not want to see the rise of AGP, often try to demean it for the alliance, he added.