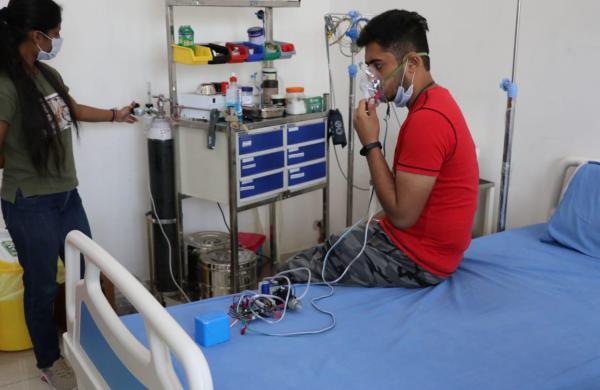 Express News Service
CHANDIGARH: The demand for medical oxygen has jumped manifold amid the second wave of COVID-19. To address the need for oxygen to counter a future crisis such as a potential third wave, IIT Ropar has developed an oxygen rationing device AMLEX, which will increase the life of the cylinder three-fold.

IIT Ropar said that as per industry figures, the pre-COVID demand for liquid medical oxygen (LMO) before the pandemic was 700 tonnes per day (TPD) across the country. During the first wave of COVID-19 last year, the demand for LMO increased four times to 2,800 TPD. Further, with the second wave, the demand has gone up more than seven times the pre-COVID levels to 5,000 TPD.

“AMLEX is a system developed specifically for oxygen cylinders. It synchronizes the flow of oxygen with inhalation and exhalation of the patient. This conserves a large amount of oxygen in the reservoir for a long-lasting operation,” said Dr Ashish Sahani, Assistant Professor in the Department of Biomedical Engineering, IIT Ropar.

“The patient’s experience is relaxing and non-suffocating as the device is fully able to work with commercially available oxygen masks with multiple openings to the environment. This device is even useful in non-pandemic situations in remote areas, as it can operate on both portable power supply (battery) as well as line supply (220V-50Hz), where the transportation of goods and supplies is a major challenge,” he added.

Amanpreet, a PhD scholar working in the team, says, “In the current situation, oxygen is provided to a patient via an oxygen mask which is connected to the oxygen supply (like oxygen cylinder) with flexible tubing. During the operation, the current commercially available device gives a continuous flow of oxygen during both inhalation and exhalation cycle which makes a temporary reservoir ofoxygen in the mask, hence a large volume of oxygen escapes from the openings of the mask to the environment in the resting period (between inhalation and exhalation) due to continuous flow of oxygen in the mask.”

Prof Rajeev Ahuja, Director, IIT Ropar, said, “This oxygen rationing device, AMLEX, shall be quite useful and user-friendly and will help meet the demand by increasing the life of the cylinder. The device is quite easy to use. It can be easily connected between the oxygen supply line at its two input and output connectors. Standard sized connectors make the device handy and ready to use without the requirement of any additional set-up.”

Dr GS Wander, Director Research and Development of Dayanand Medical College at Ludhiana, said, “We have learnt a lot about importance of effective and pertinent use of oxygen during the pandemic. Although many hospitals are building oxygen production capacity, a device like AMLEX can really help in smaller rural and semi-urban centres to use oxygen in the best possible manner at all times and specially during an unexpected surge in demand as was experienced during the second wave of the present COVID-19 pandemic.”