In a first, CRPF gets 34 women cobra commandos 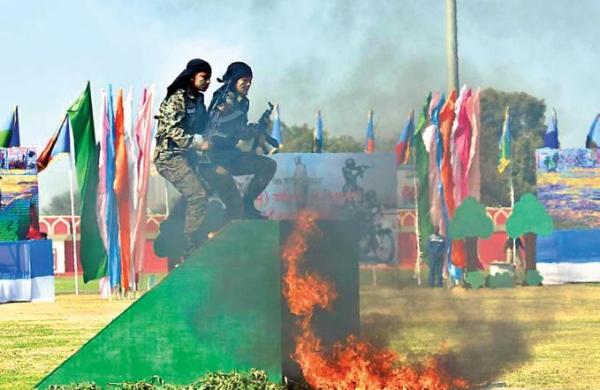 By Express News Service
NEW DELHI: In a first, the Central Reserve Police Force (CRPF) on Saturday inducted 34 women commandos in its specialised jungle warfare commando force CoBRA which is mainly deployed in states affected by Naxalism or as the government calls it Left Wing Extremism. The women commandos will soon be deployed in the anti-Naxal operations grid of the country.

While majority of CoBRA teams, whose commandos are expected to have tough mental and physical attributes, are deployed in various LWE areas, few teams are also deployed in the northeastern states for undertaking counter-insurgency operations. To mark the historic move, a ceremonial event was held at the forces’ camp in Kadarpur village in Gurgaon where the chosen women officials performed combat drills. Director General of CRPF AP Maheshwari lauded the women, saying they are an inspiration for numerous young girls who aspire to do good for themselves and the country.

He said these combatants have proved that power is not in the muscles but in the head, adding that it was important to defeat genderbased beliefs and stereotypes. The personnel, earmarked for CoBRA, have been chosen from the existing six all-women battalions of the force.

“These women will undergo a pre-induction training for three months and subsequently will be embedded with CoBRA units deployed in Naxal violence affected districts of Chhattisgarh like Sukma, Dantewada and Bijapur,” CRPF spokesperson said. Maheshwari urged the women personnel to “make their place” in the families of those youth who have gone astray or away from the national mainstream and help in bringing them back. He said women personnel can also play an important role in countering the activities of “sleeper cells”.