Important contribution of Sahu community in the development of Chhattisgarh – Dr. Shivkumar Dahria 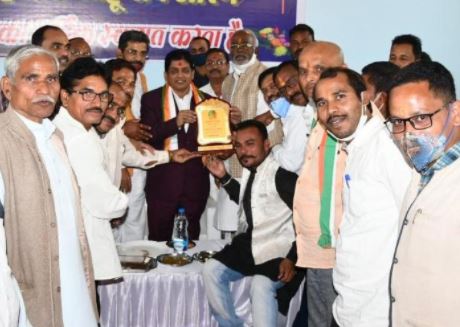 Chief guest Dr. Shiv Kumar Dahria, Minister, Urban Administration and Development and Labor Department inaugurated the newly constructed Mangal Bhavan at a program organized by Sahu Samaj in Arang. During this, he said that Sahu society has an important contribution in the development of Chhattisgarh. Sahu society is a hard working and advancing society. The government of Chhattisgarh is also following in the mentioned routes of Sant Mata Karma, Danveer Bhamashah. By taking all societies together, an atmosphere of social harmony is being created. He announced a grant of 20 lakhs by the Sahu Samaj to fulfill the demand for construction of the building in Arang.

In a program organized by Tehsil Sahu Sangh, Minister Dr. Dahria said that the government of Chhattisgarh is working for the progress of all. A large number of people of Sahu community do farming work. The government of Chhattisgarh is the biggest benefactor of farmers. Paddy is being purchased at the highest price. At the time of Kovid, farmers were given a bonus of paddy through the Rajiv Gandhi Nyaya Yojana, which showed no effect of recession in Chhattisgarh. He said that the government has fulfilled 24 of the 36 promises. Remaining promises will also be fulfilled in the coming days. Minister Dr. Dahria said that the Ramavagaman Path is being developed under the leadership of Chief Minister Mr. Bhupesh Baghel. Initiatives are being taken to provide employment to the local unemployed. New recruitment is being done with the merger of education workers. Professors are being recruited in police and college. He said that development works have been approved for the most Sahu community in the Arang area.
Municipal Council President Shri Chandrasekhar Chandrakar, Sahu Samaj President Shri Arjun Hirwani, Shantanu Sahu, Dwarka Sahu, Devnath Sahu, Jayant Sahu and many other officials of the society were present in the program.