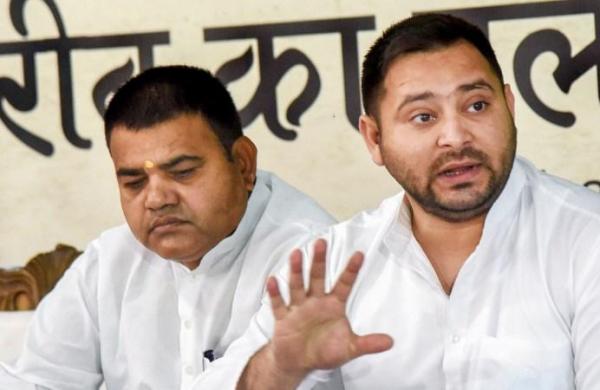 By ANI
PATNA: Rashtriya Janta Dal (RJD) leader and former Bihar deputy Chief Minister Tejaswi Yadav on Wednesday slammed Chief Minister Nitish Kumar asking why the brother of Minister RS Rai has not yet been arrested in connection with an alleged recovery of illicit liquor from a school run by him.

“The Minister said he has no contact with his brother for the past 10 years. But after our press conference, he confessed that his brother owns the school. Why is his brother not arrested?,” asked Tejashwi Yadav.

Tejaswi further hit out at the CM saying if he is unable to arrest a brother of a minister, who is involved in liquor smuggling, then he should open a liquor bar at his residence on the fifth anniversary of liquor ban on April 1.

On March 13, there was a ruckus in the Bihar assembly regarding the allegations of smuggling of illicit liquor against state minister Ramsurat Rai. The controversy surfaced after illicit liquor was recovered earlier this week from a school in Muzaffarpur run by Rai’s brother.

In 2016, Nitish Kumar banned alcohol consumption in Bihar making it a dry state.