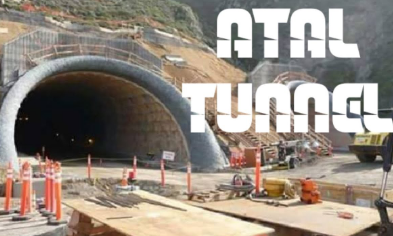 China’s official Bhopu Global Times has hinted at the gesture that if there was a war between India and China, the Chinese Army would destroy India’s recently built Atal Tunnel. The Chinese newspaper quoted a specialist as alleging that this Indian territory is very sparsely populated and that the purpose of this tunnel is only to fulfill military objectives. However, the Chinese expert also believed that this tunnel would go a long way in the supply of Indian soldiers in times of peace.

The Chinese expert wrote in the Global Times, the Atal tunnel will have no use during the war. The Chinese military has the means to make this tunnel useless. India should exercise restraint and avoid provocations as there will be no way that enhances India’s strategic capability. That too when there is a big difference in military preparation between China and India. India is far behind China in systematic fighting ability.

Chinese expert Shong Zhongping admitted that the distance to Leh has been reduced considerably due to the construction of this tunnel. This will help India in its strategic preparation. The Chinese expert said that India is building roads and bridges along the China border. The 255 km long road to Daulat Beg Oldi has been completed. India is constructing 73 important roads which will continue even in the cold.

Zhongping claimed that India is spending heavily on building infrastructure, but lacks the capacity to complete it. India does not have enough experience to build a road on the plateaus. He said that atal tunnel will not be effective during war. The leaders of India have built this tunnel for show and political purposes only.

Let us know that on Saturday, PM Modi inaugurated the world’s longest tunnel ‘Atal Tunnel’ in Himachal Pradesh. After the inauguration, PM Modi said in his address that ‘Atal Tunnel’ will become the lifeline of Leh-Ladakh. The distance between Manali and Keylong from this tunnel will be reduced by 3-4 hours. Explain that the journey between Manali to Leh will be facilitated by the Atal tunnel made by cutting the mountain.