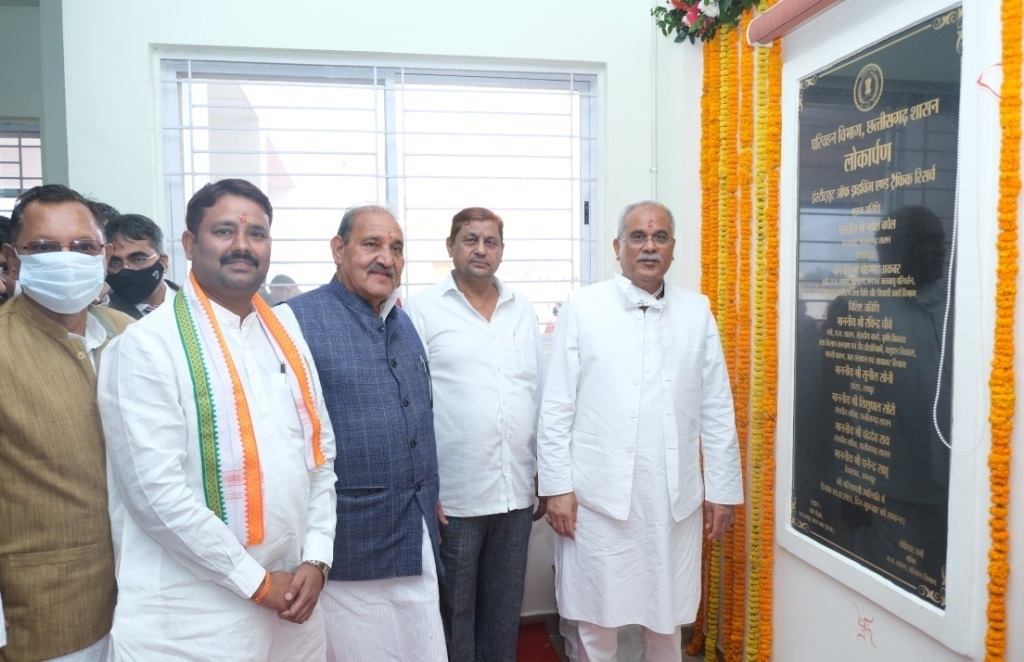 Chief Minister Shri Bhupesh Baghel today inaugurated the Institute of Driving and Traffic Research Chhattisgarh constructed at a cost of Rs. Equipped with all modern facilities of training, this institute has been built on a huge land area of ​​20 acres in village Leopard. Addressing the inaugural function, Chief Minister Shri Bhupesh Baghel said that the Institute of Driving and Traffic Research will play an important role in teaching safe driving skills. For safe transportation, it is necessary that we ourselves drive the vehicle following the traffic rules, along with it it is also necessary that the person in front should also drive the vehicle correctly. Today Chhattisgarh has about 66 lakh vehicles including buses, cars, motorcycles, trucks, school buses, so the training for safe driving of vehicles becomes even more important. On this occasion, the Chief Minister announced 50 percent concession in training fee to women and third gender candidates getting training in IDTR and free of cost training to disabled candidates. Mr. Baghel also announced to include the construction work of Cheria-Paonta road of Nava Raipur in the next main budget of the state government on the request of MLA Mr. Dhanendra Sahu. Transport Minister Mr. Mohammad Akbar presided over the programme. Parliamentary Secretaries Shri Shishupal Sori and Shri Chandradev Rai and MLA Shri Dhanendra Sahu, Chairman of Chhattisgarh Textbook Corporation Shri Shailesh Nitin Trivedi and CEO and MD of Maruti Suzuki India Shri Kenichi Ayukawa were present as special guests in the program. On this occasion, Secretary, Transport Department, Mr. Topeshwar Verma, Additional Director General of Police Mr. Pradeep Gupta and Additional Transport Commissioner Mr. Dipanshu Kabra along with many public representatives and villagers were also present. On this occasion, the Chief Minister said that in this institute, which started today in Nava Raipur, training of trainees would be given to trainees by means of state-of-the-art equipment by experts, in which they should be trained in driving, parking, backing, descending and turning. It will be taught. They will also be made aware of the working of the machines installed in the vehicles. He said that it is important not to drive the vehicle at high speed, but it is important that we have control over our vehicle. He said that employment opportunities would increase for the candidates getting training here. During this, the Chief Minister also shared with the general public the experiences of driving a motorcycle, tractor and car in his youth. He said that earlier vehicles used to have fewer functions, but today vehicles have many functions, for safe traffic it is necessary to know the function of the vehicle. In the institute, information about the working of various instruments including the engine, piston of the vehicle will be given through models and videos in the technical lab. So that minor flaws in the vehicle can be rectified. The Chief Minister said that the transport business was affected in the entire country during the Corona period, then the Chhattisgarh government understood the problem of the transporters with full sensitivity and provided them tax exemption. He said that no such exemption in tax was given to transporters anywhere in the country. During this, Chief Minister Shri Baghel inspected the facilities available for training in the institute and flagged off the training vehicles of ITDR. Mr. Baghel also took the experience of driving a vehicle while sitting in the simulator. The Chief Minister also planted a sandalwood plant in the premises. Presiding over the program, Transport Minister Mr. Mohammad Akbar said that the candidates getting training in this training institute would be supported in providing employment. Those who get training here will be given priority in recruitment to the post of driver in the government department. Licenses will be given to those who complete the training. In relation to the “Tuhar Sarkar-Tunhar Dwar” scheme of the Transport Department, he told that in this scheme, driving licenses were given to 4 lakh 65 thousand 918 people after reaching their homes. He said that the State Government for the first time understood the problems of the transporters and took decisions generously to solve them, which brought them relief. On this occasion, Abhanpur MLA Mr. Dhanendra Sahu thanked Chief Minister Mr. Bhupesh Baghel for setting up a world class driving training and research center in his constituency. He urged the Chief Minister to get the Cheria-Paonta road constructed. Shri Sahu appreciated the arrangements made across the state for the purchase of paddy. Kenichi Ayukawa, CEO & MD, Maruti Suzuki India said that 39 lakh people across the country have been trained in driving by his institute in the last 20 years. This IDTR located at Nava Raipur is the 8th organization of Maruti Suzuki in the country. He greeted the guests by saying hello. While delivering the welcome address, Secretary, Transport Department, Mr. Topeshwar Verma said that 250 people can be trained in this institute simultaneously. There is also an 80 seater hostel facility. There is also a provision of Yoga, TV Room, Play Ground for the trainees. The target is to train 2,000 people this year. Additional Transport Commissioner Shri Dipanshu Kabra expressed his gratitude towards the guests. Bus Association, School Association, Maruti Dealers, Raipur Automobile Dealers Association welcomed the Chief Minister in the program. Like this:Like Loading… Continue Reading