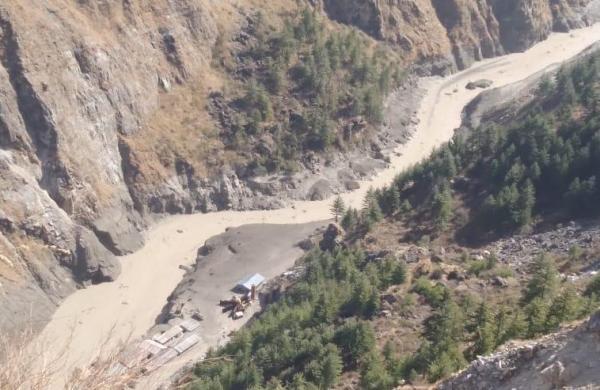 “It could be the snow avalanche/landslide downstream, and a release of 1.6 million cubic metre of water stored in subglacial lakes in the Raunthi glacier,” added the scientist. The region also has many glaciers with subglacial lakes. “Therefore, further investigation is necessary to assess risk from a flash flood,” said Kulkarni.Glacial lakes are formed when glacial ice melts to form lakes, which are held together by loose debris. A glacial lake outburst flood occurs when the dam for these glacial lakes fails.

No data on subglacial lakes: Expert

The DCCC has developed a new tool — Himalayan Glacier Thickness Mapper (HIGHTHIM) — to map depression in the bedrock below glacier ice. The tool is based on laminar flow equation and surface slope, and has been used successfully to map depressions below South Lhonak Lake in Sikkim, and estimate its future expansion. HIGHTHIM was applied to Raunthi, Trishul, Bethartoli and North Nanda Devi glaciers to map the series of depressions and subglacial lakes at the bottom of the Raunthi glacier. The DCCC and IIT-Roorkee, under IMPRINT-I project, had investigated glacial lakes in the Alaknanda basin.

The paper was published in 2019, where 26 lakes were mapped. One of the lakes identified in Nanda Devi glaciers’ ablation region was 3 Ha, where the initial assessment suggested that the lake was shallow. Additionally, a substantial part of the lake might have been frozen during the winter, considering its location and size.

Veteran geologist and glaciologist at the Wadia Institute of Himalayan Geology, Dehradun, DP Dobhal concurred with Kulkarni’s analysis and said the flash floods could be the result of subglacial lake burst. “Unfortunately, we don’t have data on the subglacial lakes in the Himalayan region,” he told TNIE. Dobhal said it is possible the water was hidden under the glacier, and held by some loose debris and ice at the edge of the glacier.

Once this was disturbed, the trapped water was let loose. It is also possible that an “older avalanche or landslide may have blocked a part of a stream, causing water to accumulate in the area for some time. But as the mass of accumulating water increased beyond a certain thre shold, i t breached the block, resulting in the gushing of water through the gorge,” said the glaciologist. He said there were around 50 hydel power projects in the region at various stages — under proposal, planning and construction.

“Glacial assessment and monitoring is a must before these hydel power projects are planned,” he added. Dobhal has been studying changes in the Himalayan glaciers for several decades.