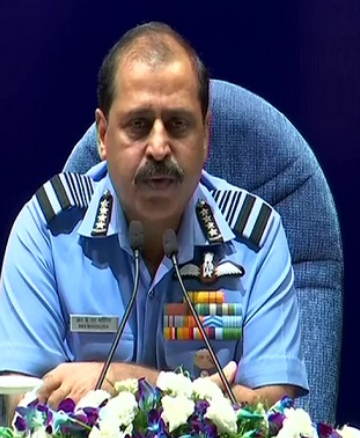 The chief of the Indian Air Force, Air Chief Marshal RKS Bhadauria on Monday said that the IAF is very “well-positioned” to deal with any threat and very strong deployments have been made in all relevant areas considering the security scenario. “We are deployed strongly to deal with any contingency,” IAF Chief said on the question of threat from China in Ladakh.

Addressing a press conference ahead of Air Force Day on October 8, Bhadauria said that China has its own areas of strength but “we have catered for all scenarios and are fully capable of handling any threat.”

He also said that the IAF is prepared to deal with a two-front war along the northern and western borders if such a scenario arises. “Be rest assured that we have deployed strongly to deal with any contingency,” the IAF chief said when asked about the situation in eastern Ladakh and possible threat from China in the region.

India and China have been locked in a bitter border standoff in eastern Ladakh for the past five months. Both sides have held a series of diplomatic and military talks to resolve the row. However, no breakthrough has been achieved to end the standoff. The armies of the two countries are scheduled to hold a fresh round of talks on October 12 with a specific agenda of firming up a roadmap for disengagement of troops from all friction points.