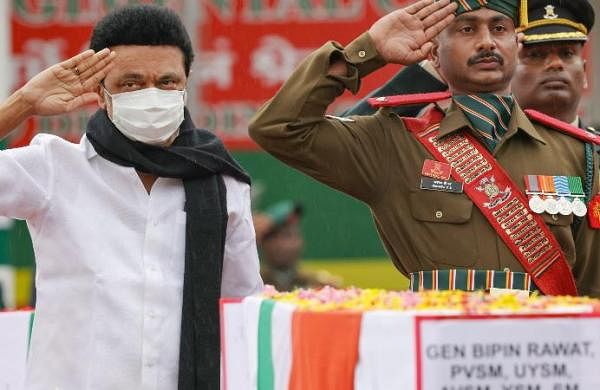 CHENNAI: Tamil Nadu Chief Minister M K Stalin on Friday personally wrote to the families of the Defence personnel killed in the Coonoor helicopter crash expressing his condolences, the state government said. All the people were with the families during this tough time, he told them in separate letters.

Chief of Defence Staff, General Bipin Rawat, his wife and 11 others were killed after the helicopter carrying them to Wellington in the Nilgiris district in the state crashed near Coonoor there on Wednesday.

Stalin had rushed to Coonoor soon after coming to know of the accident and paid floral tributes to the departed on Thursday, an official release recalled.

The state government had ensured all arrangements during the rescue activities and later during transportation of the mortal remains of the deceased, which were later flown from Coimbatore to Delhi, it said.

“Further, the chief minister today wrote individually to the families of the Defence personnel killed in the accident, expressing his sincere condolences and regret.”

“He said all the people were by them in this tough time and said though their loss is irreparable, he wished they got the strength to recover from it,” the release said.