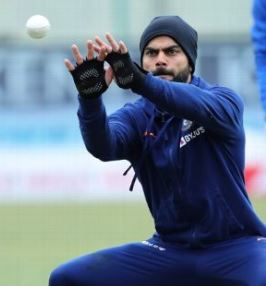 Virat Kohli could miss India’s three-day warm-up match before the day-night Test in Adelaide. Most players in the team will come to the day-night Test with only one prior experience of playing first-class cricket in the night, in the Test against Bangladesh. However, having played six limited-overs internationals in 12 days, Kohli doesn’t want to risk being less than 100% for the Test, the only one he will play before departing for paternity leave.

“Let’s see how I wake up tomorrow,” Kohli said at the post-match presentation after the final T20I at the SCG. “You know, I can’t play half and half. That’s me. I can’t just stand in slips and go through the motions. I need to wake up in the morning and see. If I feel great, I’ll definitely play. If not, I’ll speak to the physio and trainer and get a few days off and be fresh for the first Test.”

Each player has his own ideas of preparation, and Kohli has generally not been a fan of less-than-peak-intensity warm-up games. He prefers shorter, sharper and intense nets sessions instead. Add to that the strain the players must be going through having left their homes well before the IPL and moving from bubble to bubble and playing all the cricket that they have.

“I think before we go into the first Test, the feeling that we’ll want to have is that our games are at an acceptable level,” Kohli said later at the press conference. “But more important than that is that you’re physically fresh. We can’t afford the slightest of niggles or muscle strains. That is the biggest priority for us: to keep our main players physically fit. To start the Test series well, we will need our fittest 11 players on the field.”

This was perhaps the reason India’s main fast bowlers took it easy during the first warm-up game, which, for a change, happened to be a high-intensity proper first-class match against a strong Australia A side. In the end, Wriddhiman Saha and last-man Kartik Tyagi had to dig deep to avoid a loss to Australia A inside three days.