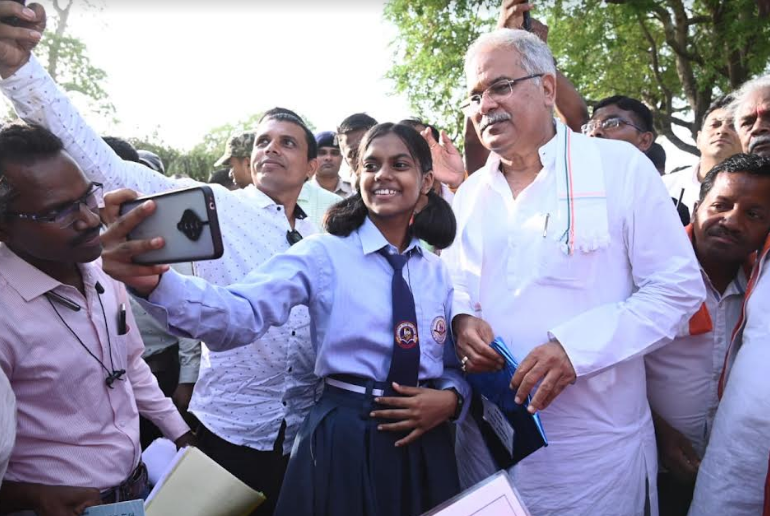 Chief Minister Shri Bhupesh Baghel shared his vision behind starting Swami Atmanand English School on the request of student Shajida during a meeting at village Mangalpur in Darbha block of Bastar. He said that I have also studied in the village school, when I used to study in the school, from that time it was in my mind that the same facilities should be provided in the village schools which are available in the cities. When I used to study in middle school and high school and sometimes used to go to Durg-Bhilai, I used to watch the studies there. There people used to go to coaching classes. We did not even get tuition in the village. When our government was formed and it was the Corona period, I called the officials and asked that Chhattisgarh has been formed for 20 years, is there any such school in which your children also study. Government teachers themselves used to teach their children in private schools. We started from Raipur. Started 3 schools first. Then in the first year 121 schools were opened, now 50 schools have also been increased and seats too. There is no dearth of talent among the children of the village. The Chief Minister said that there is no dearth of talent among the children of the village, there is no dearth of opportunities. When a person from the village can become the Chief Minister. There is no dearth of talent in villages. It is our endeavor to give opportunities to all the children. Along with the children of the city, the children of the village should also get the benefit of the government’s scheme. Shajida gave credit to the Chief Minister for her success Shajida, a student of Swami Atmanand English Medium School, Darbha, while talking to the Chief Minister in fluent English, gave her credit for her success. Shajida said that I have secured the highest position in all the Atmanand schools of Bastar with 90.8 percent marks in class X. I want to thank you, because you have given us this school. Poor children have been helped a lot by this school. I never thought that we would get such a school in a place like Darbha. Earlier, I used to travel 20 kms daily from Darbha to Jagdalpur to study in convent school. There I did not get the facilities which are available here. Due to the school being close to home, I used the time left in commuting to do my studies. Shajida also presented the magazine of her school to the Chief Minister and also took a selfie with him. Like this:Like Loading… Continue Reading