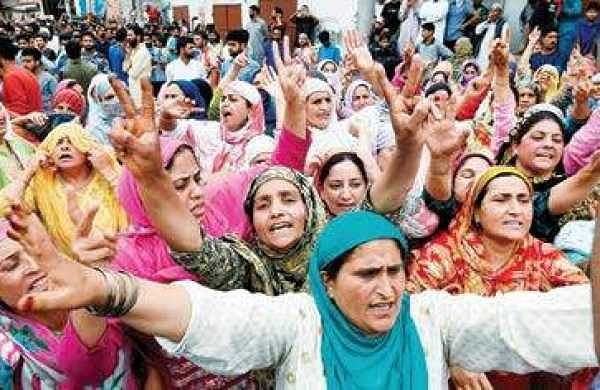 BANIHAL/JAMMU:  Ramban District Development Council chairperson Shamshad Shan on Saturday warned of protests if the authorities do not decide on handing over the body of Amir Magray, the third person killed in the Hyderpora encounter and whose kin claim he was innocent, to his family members.

Shan, however, welcomed Jammu and Kashmir Lt Governor Manoj Sinha’s order for a magisterial probe into the encounter which took place in Srinagar on Monday evening.

After the bodies of two civilians killed in the Hyderpora encounter were returned to their families, the chorus for handing over the mortal remains of Amir Magray grew louder.

Cutting across political spectrum, leaders from the mainstream as well as the separatist camp demanded that Magray’s body be also returned to his family in the Ramban area of Jammu for last rites.

“We are not disappointed as we have full faith in the Lt Governor. We are awaiting his decision and I am hopeful that he will make one by this (Saturday) evening and return Magray’s body so his final rites could be performed. But in case he does not take a decision, the situation will compel us to go for protests,” Shan told reporters in Ramban.

According to the police, Magray was a militant and was killed along with his Pakistani associate and two others.

However, Magray’s father Abdul Latief refuted the police’s claim and appealed to the L-G to ensure justice for the family.

On Friday Latief met the deputy commissioner of Ramban seeking the return of his son’s body.

Additional District Magistrate of Ramban Harbans Lal Sharma on November 17 ordered imposition of prohibitory orders under Section 144 of the Criminal Procedure Code in Magray’s Famrote village, along with Sangaldan and Seripura, until further orders.

Bodies of Mohammad Altaf Bhat and Mudasir Gul, two civilians killed in the Hyderpora encounter, were handed over to their kin on Thursday night after they were exhumed following protests by family members that they were innocent and not linked to militancy as claimed by the police.

Police had initially buried them in the Handwara area of north Kashmir’s Kupwara district.

“We are thankful to the Lt Governor for ordering a (magisterial) probe into the encounter and returning the bodies of two other civilians to their families. Let the government do its job to unveil the truth but let it also return Magray’s body. The law is equal for all civilians,” Shan said.

“We have already petitioned the deputy commissioner of Ramban. This (Magray’s) family is nationalist, fought militancy and was awarded by the government for bravery besides giving a security cover. It is difficult to think their own son will be declared a terrorist,” she said.