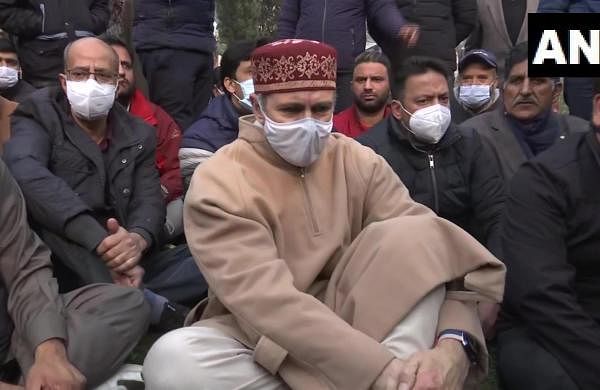 SRINAGAR: National Conference leader Omar Abdullah on Thursday staged a sit-in demanding the return of bodies of civilians killed in the Hyderpora encounter in Jammu and Kashmir.

“We are sitting here peacefully. If we wanted, we would have blocked roads, bridges, but no. There has been no sloganeering, no law and order disturbance and no road has been blocked. We are not raising voice against the government, we just demand that the bodies be returned,” he told reporters at the Municipal Park here.

A controversy had erupted over the encounter held on Monday in Srinagar following conflicting claims about the two deceased civilians as their family members contested the police’s charge that they were “terror associates”, prompting demands by various parties for an impartial probe.

Omar said despite the police admitting that the civilian was killed in crossfire, his body was not given to the family, but buried in Handwara.

“We heard this morning that the families were called to PCR and we were hopeful that after Farooq Abdullah talked to LG, there will be some development in it, so we waited. We kept waiting in our office from 11 am thinking that something will be done, but they (families) were told to wait for two to three days,” he said.

The NC leader said he wanted Lieutenant Governor Manoj Sinha to assure the families that Justice will be done.

The People’s Conference led by Sajad Lone also took out a protest march here, demanding the return of bodies of the civilians killed in Hyderpora encounter and a judicial probe by a serving High Court judge into the incident.

Senior vice president of the party Abdul Gani Vakil along with dozens of workers joined the protest held near M A Road here.

Vakil said the Hyderpora encounter is strife with doubts when seen with perception of neutrality and it is only after an impartial or neutral probe that the recent turn of events would be justly perceivable to every citizen of this country beyond a reasonable doubt.

Decision on vaccinating 12-14 year olds to be based on scientific evidence, deliberations on: Government