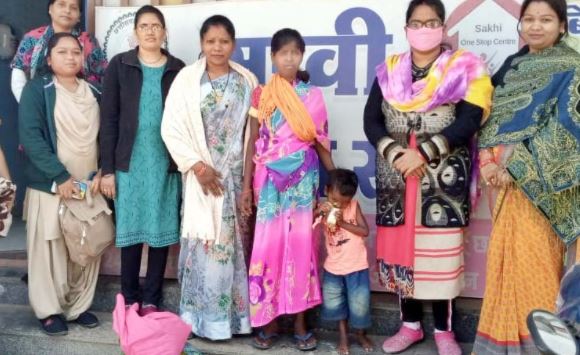 Sakhi One Stop Centers run by the Women and Child Development Department are proving to be a boon for women in distress. A woman wandering with her child, hungry and thirsty, in the nearby village of Balod is supported by the Sakhi One Stop Center. The center in-charge of Sakhi One Stop Center, operated at District Headquarters Balod, said that on 29 January in Sakhi Center, information was received through phone that a woman and child wandered near Daihan Mor in Dallirajhra road, about eight kilometers from Balod. Have been. As soon as the information was received, information was given by the Sakhi team at Balod police station. The woman and child were rescued by the team of Sakhi and Balod police station. This was followed by a health test for both mother and child, in which both were found healthy.
After health check-up, the woman and child were given shelter in Sakhi Center. For several days, the woman was not in a position to speak due to the hungry-thirsty wandering in the surrounding village. After coming to Sakhi Center, both were provided with all the facilities prescribed by the government including lodging and food. The woman was counseled the other day at Sakhi Center but the woman was not talking about anything. The woman only understood the staff’s language but did not respond. The woman slowly got mixed up with the staff and then started speaking something. The woman said that she had been wandering for almost two months and was begging for food. The woman described her name as Neiman husband Manuhar Kandul and address of Jharkhand. The center in-charge said that there is a provision to keep women in Sakhi center for a limited period only. The address of the woman’s residence in Jharkhand is being known. Keeping in mind the safety of the woman and her child, she has been sent to Nari Niketan Raipur for rehabilitation till the exact address of the woman’s place of residence is known.