‘Hum do hamare do’: Rahul Gandhi tears into Modi govt on farm laws 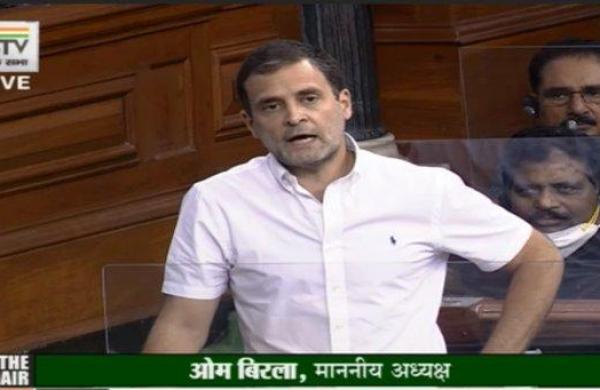 By Online Desk
Lashing out the Narendra Modi government over the farm laws, Congress leader Rahul Gandhi in Lok Sabha said these legislations will allow industrialists to buy unlimited quantity of foodgrains and hoard them.

He told Lok Sabha that it was not an agitation of the farmers only but a movement of the country and the government will have to repeal the laws.

Gandhi also dramatically led his party members and those from the TMC and the DMK to observe a two-minute silence by standing to mourn the death of “200 farmers” during the ongoing agitation and said he was doing this as the government has not paid tributes to those who died during the protests.

“Intent of first law is to give one friend, the right to have all crops of India. Who’ll be at loss? ‘thelawalas’, small businessmen & those working in the mandis. The intent of the second law is to help the 2nd friend. He keeps 40% of India’s crops in his storage. PM says he has given options. Yes, you gave 3 options – hunger, unemployment and suicide,” he added.

Gandhi cited the old family planning slogan ‘hum do hamare do’ to attack the government and said just 4-5 people are running the country.

The Congress leader also said that the farmers are not going anywhere but will overthrow the government.