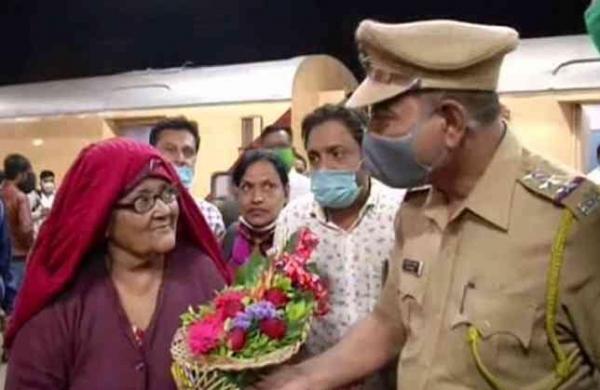 By ANI
AURANGABAD: 65-year-old Hasina Begum who had gone to Pakistan 18 years ago to meet her husband’s relatives but landed up in a Pakistani jail after she lost her passport, returned to India on Tuesday after Aurangabad police filed a report on the matter.

She was received by her relatives and Aurangabad police officials upon her return here.

“I went through a lot of hardships and I am feeling a sense of peace after returning to my country. I am feeling as if I am in heaven. I was imprisoned forcefully in Pakistan,” she said.

“I want to thank Aurangabad police for filing a report in the matter,” she added.

Khwaja Jainuddin Chishti, a relative of Hasina Begum, also thanked Aurangabad police for the help provided by them in bringing her back to her home country.

Begum had lost her passport in Lahore after arriving there 18 years ago to meet her husband’s relatives.

She was locked up in a jail in Pakistan for the last 18 years.

She urged the court in Pakistan that she is innocent after which the court sought information in the matter.

Aurangabad police sent information to Pakistan that Begum has a home registered in her name under the City Chowk police station in Aurangabad.

Pakistan released Begum last week and handed her over to Indian authorities.