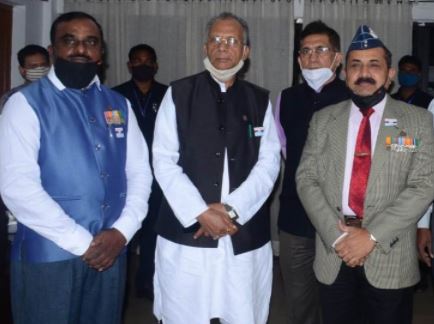 For the sovereignty and security of the country, the service and dedication of Border Security Force (BSF) personnel posted on the outskirts has been saluted by the Home Minister Shri Tamradhwaj Sahu. The Home Minister attended the BSF Foundation Day program held in Mana, the capital on Friday.
Home Minister Sahu, while bowing to the BSF jawans for their service to the nation, said that the BSF is called the “first wall of defense” of Indian territories. The BSF has distinguished itself as a brave force, believing unwaveringly on its commitment to save the country and assist civilians during natural disasters. India is proud of BSF. In Chhattisgarh state also, BSF in anti-Naxal operations. Has an important role. Additional Chief Secretary Home Shri Subrata Sahu, Border Security Force ADG Shri S. L. BSF officials including Thaosan, Special Director General of Police Shri RK Vij and Shri Ashok Juneja were present.
It is noteworthy that after the Indo-Pakistan and Indo-China wars, the BSF was formed on December 1, 1965 as a unified central agency to ensure the security of India’s borders and matters connected therewith. It is the world’s largest border guarding force.