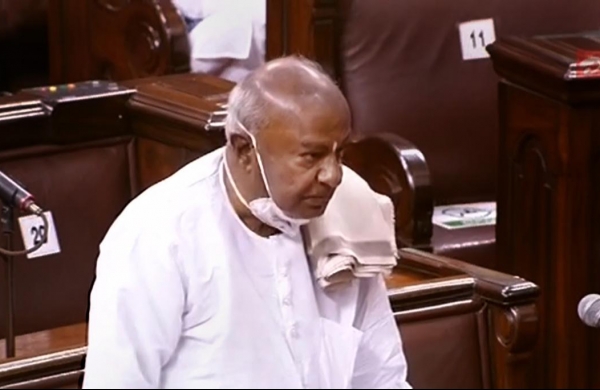 By Express News Service
BENGALURU: Former Prime Minister HD Devegowda on Thursday raised the issue of the farmers’ protest in the Rajya Sabha during his motion of thanks over the President’s speech. The JDS supremo and Rajya Sabha member from Karnataka implored the Union government to hold talks with protesting farmers instead of building concrete walls. While joining the other opposition parties in condemning the violence that broke out on January 26, Gowda added that the government should not punish farmers for the actions of a few miscreants.

“I am in the last leg of my life. I demand that the government end this matter peacefully. Let them call for a meeting with farmers’ delegations. Some leaders of this house can also join and we will give our suggestions to close this matter. Else, things won’t run smoothly. The government thinks punishing them will solve issues. But farmers are not responsible for what happened on 26th January,” Devegowda said.

ALSO READ: ‘We briefly discussed it in team meeting, everyone expressed views’: Kohli on farmers’ protest

He highlighted that the farm laws were a state subject and the Centre should have sought the concurrence of states first. “The contention is about the three bills enacted by the House, although on that day there were no proper proceedings conducted as the House was not in order,” Gowda said at the beginning of his 18-minute speech. The former Prime Minister asked the House what was the next plan now that the bills have been kept on hold due to the apex court’s orders.

Even as he said some of the schemes introduced in the last six years by the Narendra Modi government have seen some results, he asked the Prime Minister to take up the matter of linking the Cauvery and Mahanadi rivers to provide a permanent solution to the farmers of Karnataka.