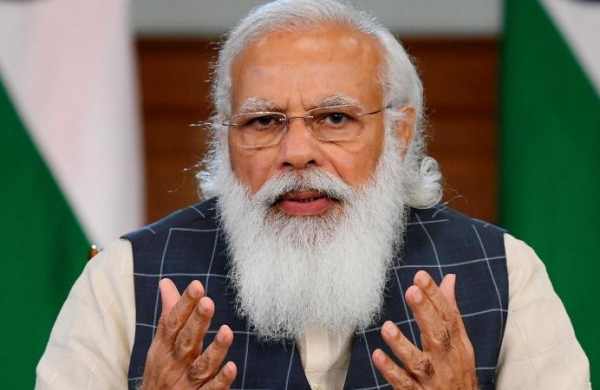 By Express News Service
HYDERABAD: Prime Minister Narendra Modi laid out a mission for 25 years as the nation prepares to celebrate 100 years of Independence in 2047. On Saturday he interacted with the IPS probationers of 2019 batch, who have completed their training at the Sardar Vallabhai Patel National Police Academy (SVP NPA), Hyderabad. During the virtual interaction, the Prime Minister stressed on various aspects of policing.

“Remember you are on a 25-year mission. Before 1947, it was a fight for ‘Swarajya’ and young people like you had played a great role in making it a reality. Now the responsibility on this young generation of officers is to achieve ‘Surajya’,. Every decision you make, every initiative you take up in service will have a great impact in achieving this,” he told the probationers.

178 probationers including 144 IPSs and 34 candidates from neighbouring countries of Nepal, Bhutan, Maldives and Mauritius, who underwent the training, participated in the interaction. 33 of the IPS probationers are women.

The 2019 batch of IPS officers trained at SVP NPA has two women officers as toppers of the batch – Ranjitha Sharma and Shreya Gupta. During the virtual interaction with the probationers, Prime Minister began his greetings saying ‘Vanakkam’ addressing Shreya Gupta, who belongs to Delhi and was allotted to the Tamil Nadu cadre. For the first time in IPS history, Ranjitha Sharma becomes the first woman not only to top the training, but also win the prestigious IPS association’s Sword of Honour.

After a brief introduction and welcome note by Atul Karwal, Director, SVP NPA, Shreya Gupta led the interaction, during which the Prime Minister interacted with eight probationers including one from Maldives. During the interaction, the Prime Minister inquired about their interests, hobbies, ideas for police reforms and how they could use them in improving policing in the country and inspire others, especially daughters to join the police force. “In tough and demanding jobs, like policing, hobbies will prove to be one’s great strengths and also help in delivering best results, when combined with work,” he said.

Hailing from Haryana and allotted to Rajasthan cadre, batch topper Ranjitha Sharma told the Prime Minister that during her district training, she faced a very sensitive law and order situation, during which she learnt the importance of being patient. “It is our own people we handle in such situations and we need to display the highest level of patience. Policing is an embodiment of patience, courage and valour,” she said. Quoting Sardar Vallabhai Patel’s words to police officers, she said if a police officer loses patience, he is no more a police officer.

The Prime Minister told Ranjitha with her hard work and performance, she had left her mark in every aspect of training and that her achievement would definitely change the thoughts of people about daughters and women. “I want to give you advice which is not related to duty. Wherever you are placed, visit a girl’s school for an hour once a week and interact with them. Just talk to them and listen to them. And also as you continue practising yoga, choose any open garden area, where you can start yoga classes for girls. During your free time, you can monitor and guide them.”

When asked what her goal as a police officer is, she said that making police and police stations more accessible to people and changing the mindset will be her goal and the greatest achievement. Ranjitha, who wanted to make a career in journalism, said that though she worked in different areas before joining the service, she realised that being a police officer, she can do great work for people and above all the honour in the police uniform is the driving force.

When Modi asked Gaurav Ram Prakash Rai from Maharashtra, alloted to Chattisgarh, how he would use his hobby chess in policing, Rai said like chess is a game of strategies and tactics, police particularly in Chhattisgarh, which is a hotbed for LWEs, would need strategies in policies and tactics in operations. When he said development is the only solution to curb the LWE menace, Modi suggested that development and social connect along with implementation of law should be used to reach out to the people. “This will help you gain the trust of the people,” Modi said.

Speaking to KPS Kishore of Andhra Pradesh and allocated to Andhra Pradesh cadre, Modi said they have to come up with new and innovative ideas to control cyber frauds and financial frauds, which is a growing concern of the time. “Women and children are the most targeted groups in cybercrimes. What are your ideas to tackle this,” asked Modi. In response, Kishore said increasing awareness among people and utilising the experience during the field training in Kurnool and from what they have learnt in the academy would definitely be of great help.

The Prime Minister also gave a call to the officers to change the negative image and perception towards the police department which has been established over the years.“During the covid pandemic, the police force across the country had worked shoulder to shoulder with people, agencies from various walks of life. They were seen helping people, cooking and feeding the poor and in many other ways. This has changed the image to a large extent, but it is back to normal now. This process should not stop here and this process of changing the image of police should be a continuous process,” he said.

He reminded the officers of the efforts of the NDRF in natural calamities and disasters and people’s confidence in them. “ In any emergency, people are confident that NDRF personnel will rescue them, even by risking their lives. They have earned great respect among the people. Many of them are from police forces and your friends also. Your reach to the people also should be on those lines,” he reminded.

He also spoke about the ‘Azadi ka Amruth Mahotsav’, as India celebrates 75 years of Independence a few days from now. “This interaction happening at this juncture of great importance is very delightful and inspiring. I do not know how many of you have visited Dandi or Sabarmati Ashram. Let me remind you of Mahatma Gandhi’s Dandi March. This step had created a revolution in the freedom struggle and when Gandhiji completed the march after 24 days, the whole nation came on one platform to fight for freedom. Remember the zeal and desire of the people then, which had fulfilled the dream. Our nation wants such zeal and commitment from you all and other young people at this moment,” the prime minister said.

Expressing great confidence in the officers, the Prime Minister said that he sees a new generation in them, who would police the country to the next level in the coming 25 years.

He also lauded the women officers, saying that daughters joining the police forces strengthens policing in the country. The government has taken up several initiatives to encourage daughters in different fields and these daughters here would surely inspire generations to come, he said.

“I see a vibrant women police force. Our daughters, with their efficiency, accountability, compassion and empathy, will take policing to the next level, reaching out to every citizen,” he said, as he encouraged more daughters to join the police forces.

Speaking about the current situation, he said, “You are beginning your career, when India is moving towards transformation in every aspect. Your preparations, efforts, and ideas should work towards this goal. When a nation progresses towards development, challenges from within and outside also rise in the same manner. It’s your responsibility to handle them, stop crime with innovative ideas. Develop mechanisms to tackle cyber crimes and implement them.”

He also exhorted them to have this mantra of ‘Ek Bharat Shreshtha Bharat’ always in their minds. “You are the brand ambassadors to this idea. You will have challenges ahead of you and sometimes they are very local. But you should always keep this mantra in mind and make a decision. Do not always think in the police station from the police head quarter perspective. Get acquainted with every aspect in your area, become friendly with people and keep the respect of the uniform the highest, even as you maintain law and order.” he advised.

“What are your ideals, goals? What you do to work and achieve them, will be a measure of your work and that will have a great impact on this society and the nation in the coming days. I am sure you will be successful in making this possible,” he said.