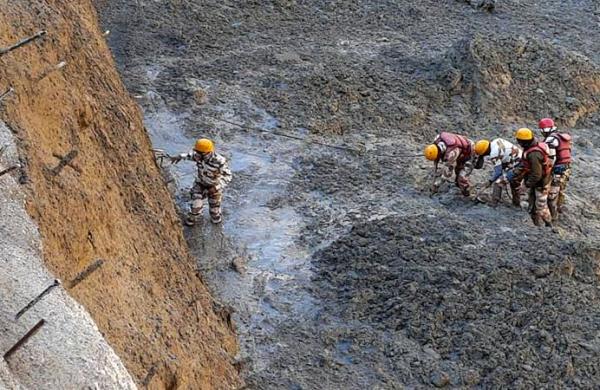 By PTI
LUCKNOW: The Uttar Pradesh government on Sunday put on alert the authorities in all districts on the banks of the Ganga and asked them to continuously monitor the water levels in the river after a glacier broke off at Joshimath in neighbouring Uttarakhand’s Chamoli, triggering a massive flood there.

The glacier burst triggered an avalanche and a deluge in the Alaknanda river system that washed away hydroelectric stations, leaving at least seven people dead and 125 missing who are feared dead.

In a disaster alert issued to district magistrates in Uttar Pradesh on Sunday, the relief commissioner said, “Reports of breaking off a part of the Nanda Devi glacier in Uttarakhand have been received. The districts on the (banks of the) Ganga river need to be on a high alert and the monitoring of water level needs to be done 24×7.”

“If required, people should be taken to safer places. The NDRF, SDRF and PAC Flood Company have been instructed to be on the highest alert,” the statement added.

In a tweet in Hindi, Uttar Pradesh Chief Minister Yogi Adityanath said, “To tackle the natural disaster in Uttarakhand, the Uttar Pradesh government will extend all possible help.”

In another tweet, he said, “Feel sad by the news that many people are feared dead in the disaster which took place after breaking off a glacier. I pray to Lord Ram to give peace to the souls who have passed away, strength to the aggrieved family members to bear the loss and speedy recovery to the injured.”

Later in a statement, the chief minister said in case of an increase in the water levels, people residing close to the the banks of the Ganga should be shifted elsewhere.

He appealed to people not believe in any rumour.

“People should exercise caution and not venture towards the river banks. In case of any adverse circumstances, cooperate with the district administration. The UP government is taking all necessary steps,” he said.

Interacting with reporters in Ayodhya, Adityanath said as the Ganga covers almost 1,000 kilometres in the state, they are exercising full caution.

He said the the Jal Shakti Department was alerted soon after the incident.

“The Home Department is keeping a watch,” he said, adding that water in the Alaknanda river is fast receding.

“Our supposition is that the water will take time to reach lower areas. After Haridwar, we will absorb this water at the barrages in Narora and Bijnor, and there will be no problem in the downstream areas,” he said.

“Despite this, all 25 districts in the state where the Ganga flows have been alerted. The emergency and home departments and the SDRF are on alert,” the chief minister said, stressing there is no need to fear.

Divers and revenue officials of villages located on the banks of the Ganga have been told to remain on alert.

Mishra inspected the Mahadevi Ghat in the district and said in case of rise in water levels, villagers will be taken to safer places.

In Ballia too, the district administration alerted people, according to District Magistrate Shrihari Pratap Shahi.

Irrigation officials said the department is on alert and the Ganga is flowing almost five metres below the danger mark.

In Shahjahanpur, people on “kalpvaas”(a peiod of austerity observed by devotess in the month of Magha near the river banks) are being taken to safer places while others have been told to remain alert.

District Magistrate Indra Kumar Singh told PTI, “During the month of Magha, ‘kalpvaasis’ stay for almost one month on the banks of river Ganga, take bath and offer prayers. Almost 100 ‘kalpvaasis’ are being shifted to safer and higher places.”