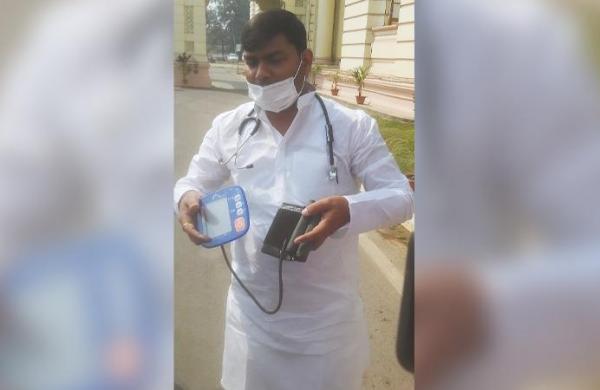 Express News Service
PATNA: A day after chief minister Nitish Kumar lost his cool at an RJD MLA in the Bihar assembly, Dr Mukesh Raushan, an opposition legislator from Mahua, landed up with a BP measuring device and a stethoscope around his neck on Tuesday.

Donning his apron, Dr Raushan told the media that he has come to the assembly with these devices to protest against Nitish Kumar “who frequently loses his cool these days.”

Referring to the CM, he said, “Our chacha gets angry very soon these days. On Monday, he got angry at RJD MLC Subodh Rai when the latter asked a supplementary question. Our guardian Nitish ji gets angry very frequently and it happens only when one has a high BP.”

The device brought by him will be used to check the blood pressure of the chief minister, he said, further adding that he will do so in his chamber with his permission.