Heera Group, Sparsh Hospital and Raipur Mayor won their respective matches in the second round 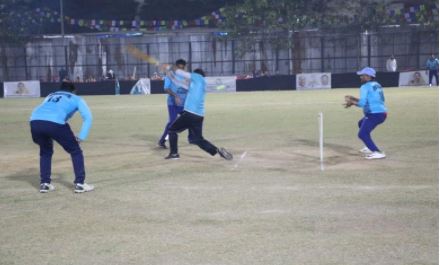 Late organized by Chhattisgarh Sports Congress at Subhash Stadium in the capital. 3 matches of second round of Inderchand Dhariwal Smriti Congress Corporate League Cricket Competition were played. Congress state president Praveen Jain said that the first match played between Sparsh Hospital and Raipur Municipal Corporation, the toss of this match came in favor of Sparsh Hospital and Sparsh Hospital decided to bowl first. Batting started with a poor start to the corporation and the entire team was all out for 49 runs, Sparsh Hospital, chasing the target, got the target in 4.4 overs, the man of the match Dinesh who scored 13 in 2 overs Got 3 wickets for runs. The second match of the day was played between Heera Group and CG Dial 112, batting first after winning the toss, the Heera Group scored 130 losing 3 wickets, with the highest score being Sumit who scored 46 runs off 22 balls with 5 sixes, Chasing the target, CG Dial 112 batsmen could score only 95 runs, the man of the match being Yashwant, who took 34 runs in batting and 1 wicket in bowling. The third and final match of the day was played between Rishabh Builders and Raipur Mayor 11, Rishabh Builders picked the first fielding by winning the toss, Mayer 11 set the target of 113 runs by the batsmen, Rishabh Builders could score only 44 runs. He was the man of the match Appu, taking 5 wickets.