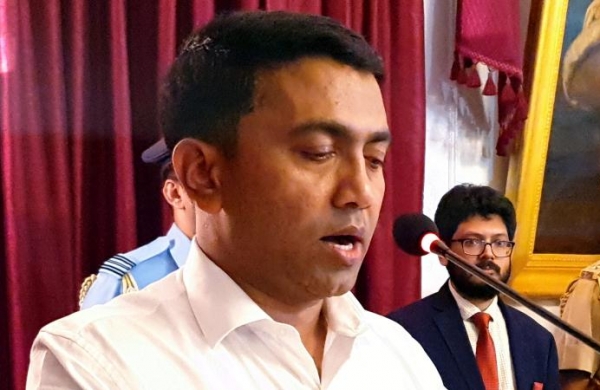 By PTI
PANAJI: Heavy police deployment was witnessed at Sankhalim in Goa on Sunday as Congress tried to take out a protest march against state Chief Minister Pramod Sawant over his recent remarks about rape victims, while workers of the ruling BJP gathered outside the CM’s residence in the town in his support.

Addressing the state Assembly three days later, Sawant had said that parents need to introspect on why their children were on the beach late at night.

He had also said parents have a responsibility to ensure the safety of their children and hinted that they should not let their children, particularly minors, out at night.

However, as his remarks kicked up a row, he later issued a statement saying that his comments were taken out of context and that he was deeply pained by the incident.

But continuing to target the chief minister over his remarks, the Congress tried to take out ‘Sadbuddhi Yatra’ at Sankhalim town on Sunday.

Goa Pradesh Congress Committee president Girish Chodankar, who was leading the march, alleged that the police did not allow the peaceful protest to be held.

ALSO READ | There can’t be police personnel to protect every girl: Goa minister

He also claimed that the police manhandled the party workers, due to which the dress of a woman activist got torn.

“The CM has caused damage to humanity, tarnished Goa’s image, damaged tourism and derailed the process of women empowerment through his insensitive statement justifying rape and blaming rape survivors and their parents,” Chodankar said.

The Congress leader condemned the “high-handed” behaviour of the government.

A senior police official said, “Heavy police force was deployed in the town to ensure that no untoward incident takes place.”

Meanwhile, hundreds of BJP workers gathered outside the chief minister’s residence to show their support to him.

Shubadha Savoikar, a BJP leader, said that Congress party should not dare to take out a protest march to the CM’s house as hundreds of people are there to support him.

“The Congress is indulging in petty politics, which would not be tolerated at Sankhalim,” she said.