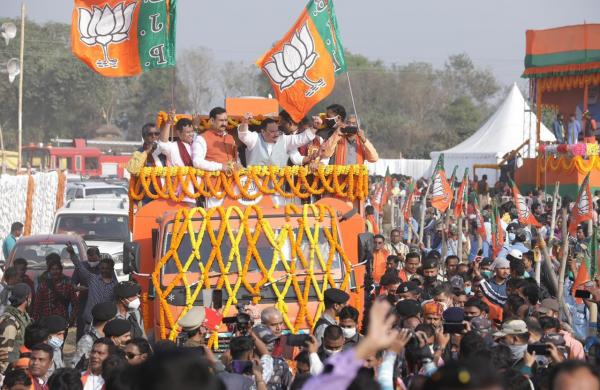 By PTI
KOLKATA: The Calcutta High Court on Tuesday refused to pass any interim order on a public interest litigation (PIL) praying for its intervention to stop the BJP’s ongoing ‘Parivartan Yatra’ rallies across West Bengal and directed that it will hear the matter on February 11.

Claiming that the yatra would affect the Covid-19 situation and law and order in the state, the petitioner prayed for an order that the rallies be stopped.

A division bench comprising justices Rajesh Bindal and Aniruddha Roy directed that it will hear the matter on Thursday.

The petitioner’s lawyer prayed for an interim order to stop the yatra till February 11, which was refused by the court.

The BJP has started a month-long Parivartan Yatra from February 6, as part of which it intends to take out five rallies criss-crossing the state ahead of the assembly elections in West Bengal due in April-May.

BJP national president JP Nadda flagged off the second phase of the yatra on Tuesday at Tarapith in Birbhum district.

The first phase was launched on Saturday at Nabadwip in Nadia district.