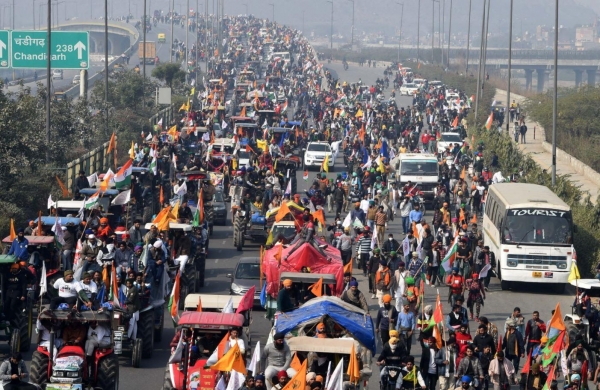 By PTI
NEW DELHI: The Delhi High Court on Thursday declined to entertain a PIL seeking investigation into the violence during farmers’ tractor rally on Republic Day and the alleged lapse in security which resulted in a religious flag being hoisted at Red Fort.

A bench of Chief Justice D N Patel and Justice Jyoti Singh asked the petitioner to either withdraw the plea or face dismissal with costs.

“So you started typing the petition right after the incident on January 26 noon? Do you know how much time is given for investigation under the Criminal Procedure Code? You are a lawyer.

How much time is given for an investigation? “You expect the investigation to be completed within two days of the incident? Does the government have a magic wand which it will wave and everything will be done? Should we dismiss it with cost or will you withdraw,” the bench said to the lawyer.

Subsequently, Sharma said he will withdraw the petition filed on behalf of three Uttar Pradesh residents who had sought action against the persons involved in the violence.

“Permission sought is granted. Petition is dismissed as withdrawn,” the bench said.

During the brief hearing, Solicitor General (SG) Tushar Mehta told the court that 43 FIRs have been registered in connection with the incident and of those, 13 have been transferred to the Special Cell (Crime Branch) of Delhi Police.

The SG also told the court that where required provisions of the Unlawful Activities (Prevention) Act have been invoked and the “investigation was being carried out strictly in accordance with law and on priority basis looking at the seriousness of the matter”.

Delhi witnessed violence during the farmers’ tractor rally called to highlight their demand for repeal of the Centre’s three farm laws.